Home » News » Your World » May The Fourth Be With You 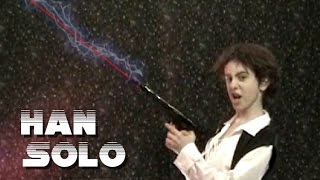 Are you a fan of Star Wars? Personally, I’ve never had the chance to get into the films properly and when I’ve watched them, it was when I was too young to care. My stepbrother would watch them and I’d be in my room playing Disney Princesses. Hey, don’t judge me, I was like five and you probably did something similar. Ahem, moving on…

You’re probably all aware of the quote: ‘May the force be with you”, right? Well, every 4th May (that’s this Saturday, this year, 2013…if you’re reading this next year, greetings from the past) is the Star Wars fans holiday known as “May the Fourth”. Geddit? May the force…May the Fourth…anyway…

The date is considered a holiday by Star Wars fans to celebrate Star Wars culture and honour the films. Current-day Star Wars fans were not the first to introduce the line “May the fourth be with you”, though. When Margaret Thatcher was elected Britain’s first female Prime Minister on May 4, 1979, her party placed an advertisement in The London Evening News that said “May the Fourth Be with You, Maggie. Congratulations.”

Last year, the Young Promoters Network, here in Rhondda Cynon Taff, held a special gig in honour of the Star Wars day and people who attended dressed up in either costumes of the popular Star Wars characters or simply wore Star Wars t-shirts.

Since Star Wars is now signed under Disney, Hollywood Studios in Walt Disney World, Florida, will also be holding events and activities.

But what we want to know is what will you be doing? Personally, I’ll be doing nothing related because I know nothing of the films (though, they are on my film bucket list… if I had them on DVD, I’d watch them, but I don’t so I won’t) but I know a lot of Star Wars fans and I’m hoping they’ll be doing something funny and upload it to Facebook and even on here.

Let us know what you’re doing in the comments…or even upload an article.

*Ahem* May the Fourth be with you…it’s not funny anymore now, is it? I’ve mentioned it too much. You get the idea.

Related Article: Star Wars To Be Turned Into Sitcom