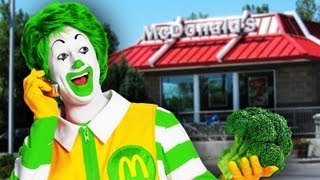 McDonald’s is one of the world’s largest and most famous fast food chains in the world. I’m sure that most of us have eaten there before and most of us pay the family-friendly restaurant a visit on a regular basis, right? Personally, I enjoy the food there, but now, I think enough is enough.

“What’s all the fuss about?” you may ask. Well, McDonald’s caters for both meat eaters and vegetarians. They do two options. One being the Veggie Spicy Deli. This is what I order every time I eat there since this is the only thing I like. Now, normally, the order is fine, but on six – yes, six – occasions, I have had to return my meal because it has been replaced with meat. Now, I have been a vegetarian all of my life. When I was old enough to understand, my mother explained what a vegetarian is and that it was my choice to make if I wanted to eat meat. I decided to stay vegetarian because of a number of reasons.

It is a basic human right to not be given food that you are against and/or cannot eat. On each of these incidents, the Deli has been wrapped and labelled as “VEGI” (the way they label it) and therefore, I felt as though I could trust the company to provide me with a 100% meat free meal. The first time this happened, I took a bite without even feeling the need to check it. What did I bite into? Yup, juicy meat. I spat it out in disgust and complained. You’ll never guess what happened. The woman who I complained to just replaced my meal and chased after me saying “Miss, we charged you for the meat, you need to pay us more for the veggie as it costs more.” What. On. Earth?

They gave me meat and expect me to pay them after they made a mistake! Some people are vegetarian due to their religion and therefore it is against their religion to eat meat. What if I followed a religion like that? What if it’s happened to someone who followed a religion with that belief? That is atrocious and the fact that I had to pay is beyond ridiculous. This took place in Cardiff Queen Street McDonald’s.

It happened again a further five times. Twice being in the Tonypandy McDonald’s and three times in the Cardiff Queen Street restaurant. Four out of six times I checked my meal so only on the sixth (last) time is when I ate without checking and again, the meal was labelled to be vegetarian. My family have had their meals go cold whilst they have complained with what has happened. Only twice have I received something as an apology. Two medium meals in Cardiff and four McFlurries in Tonypandy. That’s it.

Seriously, McDonald’s. You cater for so many people and a lot of people are vegetarian. This is so wrong that people have to experience what I have experienced and the fact it has happened on six occasions is outrageous. It also happened to my friend who gave up meat for Lent – a Christian event – which was then ruined thanks to McDonald’s.

I still eat at the restaurant purely because of the prices and they cater for all of the family’s taste, but this is ridiculous and I do plan on taking this further because I believe this is totally wrong and against so many rights.

Ever been in my situation? Comment below and maybe somebody will realise the ongoing mistakes of McDonald’s.