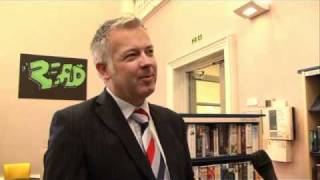 The day I meet Derek Brockway.

What a day! It was a cold Thursday morning (in case you were wondering) and Bethan and I went to Monmouth Library, thanks to Mrs.Lewis, head of sixth form at Mountain Ash Comprehensive School, for being a lovely lady and letting us out for the morning.

Everyone had gathered for the launch of the new publicity angle . It’s called Fancy That and it includes a family called the Bibli’s made by Tantrwm. Cool I know. The library was massive, by the way, it even had portraits of the people who built it.

After scanning over Hulk Hogan’s autobiography, we interviewed Alun Ffred Jones AM, the culture minister for Wales which basically means he’s in charge of what cool things we get to do. Fair play to the guy, he did know his stuff about books.

Then, after a few divine welsh cakes, we were introduced to Mr. Brockway himself. He was awesome, funny and was up for a joke, which was everything I thought he would be, I hope this comes through in the interview because he was coolie pie.

I have put a link to the interviews, hope you enjoy them and I have to say sorry about me saying “thanks Der” at the end. Believe me, I’m quite ashamed about it too.

1 thought on “Me and Derek”