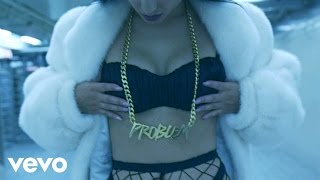 Editor’s Note: The video linked to this article is classed as explicit and could be sensitive to some users. In no way is Wicid affiliated with the music video.

I am, of course, here to inform you of the recent exploits of Natalia Kills – my favourite thing since sliced bread and I Love It by Icona Pop.

Despite a rather embarrassing (and probably intended) leak recently, the video for Kills’ first single off her second album, Trouble, is now available for general consumption.

In-case you missed my previous musing over Problem, just let me assure you of how amazing it truly is. If you were familiar with Kills before (as an ardent fan I wouldn’t be surprised if you weren’t, to be honest) then Problem will seem different to anything you’ve seen from this on-the-cusp-of-greatness performer than ever before.

Just think guitars. Think heavy guitars. Think a stiletto-stomping beat that Regina George will be dancing to in the ninth circle of Hell and you’ve just scratched the surface of Problem by Natalia Kills.

The video, set in the night-time back streets of LA, is the foundation stone for the exploration of Kills’ dark past in Trouble.

In the video, Kills can be seen running around causing – ahem – trouble with her bad-boy beau, setting fire to mink coats and graffitti-ing walls. It’s all very above board.

As with Kills’ previous efforts, the visuals and style of the Problem music video can’t be faulted and the video perfectly executes the spirit of the song. The bit in the phone booth is particularly, um, ‘interesting’, shall we say.

One (by ‘one’ I of course mean myself) hopes that with Kills now seemingly comfortable and confident with her new incarnation – taking the Kills persona to, I suspect, an entirely new level – we’ll see Natalia Kills getting the recognition she so desperately deserved (and sought) with her last album.

But while you could certainly see the song hitting the airwaves of Radio One, it’s not exactly Kills’ most commercial offering and the video is, in most places, far too explicit to be played on any music channel until after midnight at the latest.

But with all that being said, I love Natalia Kills and I love Problem, so we can but hope, pray and dream that Kills finally breaks through that glass ceiling into the mainstream sometime soon.

Problem is out now in the US but a UK release date has yet to be finalised.

Trouble is scheduled for release in September and the second single, Saturday Night, was released July 2nd.

Now, go watch Problem and comment if you love it or hate it.