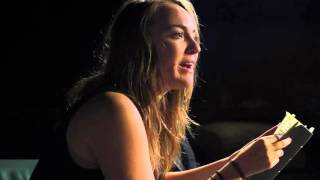 An interrogation on human nature; “My Name is Rachel Corrie” is an honest and uncomfortable conversation, with a quirky warrior of a woman.

The Other Room presents a new production of: “My Name is Rachel Corrie” by Cardiff-based company Graphic – in their first production – to the audiences of Cardiff.

The play; which won both the Theatregoers’ Choice Award and Best New Play when it debuted in 2006, is based on the diaries and journals of Human Rights Activist, Rachel Corrie, who was killed by the Israeli Defence Forces in 2003, while she was supporting the Palestinians against the Israeli authorities. These diaries were edited by Alan Rickman and Journalist, Katharine Viner.

The show could not be simpler from an aesthetic point of view, with just one arm chair, a pile of clothes and sand on the stage, this is not a glitzy musical but a one woman monologue of an unextraordinary person who found herself in a truly unbelievable situation. To begin, Rachel (Shannon Keogh) wakes up and begins to speak to the audience about her life, interests, her parents, friends, school, her small middle-America town, and most importantly her dreams.

I was hooked on every word that Keogh said for a full 45 minutes, as I related to her thoughts about a small town, her daydreams and her self-realisation of her innate privileges as a White, American woman. Rachel was brought to life as an endlessly fascinating character who somehow seemed normal and average, but also so brave and wise.

As we reached the half-way point of the show my attention began to slip due only to the natural teetering off your brain does when hearing the same voice or sound for a long period of time. However, within minutes I was drawn back in by Keogh’s character development, through her animated gestures and different accents/tones, and of course of the scenes that she painted at the back of my mind.

The play had its light-hearted moments and Keogh (and equally Rachel) won laughs for her cynical analysis of the world, her brash teenage angst and antics, and the stories of the people around her. A personal highlight for me was the story of the Dairy Queen and her patients who went to get ice-cream.

The 2nd half of this play is more difficult and challenging; not so much to watch but to listen; and just as the reality of Rachel’s life in Palestine during the illegal Israeli Occupation sets in, so too does the audiences own sense of the atrocities that still occur due to this ongoing crisis between Israel and Palestine.

As Rachel becomes more and more angry at the conditions of the Palestinians, it becomes difficult to sit there and have a mirror put up-to your face in such as a way to examine and dissect your own humanity – to be aware of such problems in the world and yet do nothing about them – and still go about your daily life.

Before this play I knew a small amount amount about the occupation but this important play puts a human slant on it all and delivers it; not from a victim, from an outsider who listened, experienced, and most importantly translated it for a Western audience, into something we could understand.

This play is not an easy night-out. At times I could not look Keogh in the eye, but it is fantastically powerful and Keogh brings Rachel from the page to the front of your conscious, allowing her to ask you to think about what the things we brush under the rug.

“My Name is Rachel Corrie” is in The Other Theatre until Saturday 21st October, so book your ticket now!

For more information about any of the issues raised here please visit the Palestine Solidarity Campaign.

Review > hang @ The Other Room