Home » News » Your World » Natalia Kills – The Most Hated Woman on the Internet? 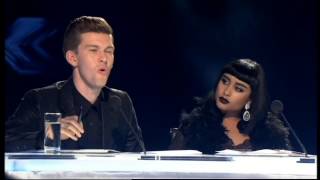 Natalia Kills kicks off and the world explodes.

Sometimes you spend so much time wishing for something to happen, you delude yourself into thinking that it’s only a matter of time until it comes true and everything comes right.

Natalia Kills – who is, despite what’s happened, one of the most underrated popstars of the past decade – has spent many years in search of stardom, and I’ve been there almost every step of the way, willing her on and wishing her well.

This fame or status never really materialised; her two albums, Perfectionist and Trouble are two fine examples of modern-pop amazingness but they barely dented charts worldwide and the latter failed to chart in the UK when it was released in 2013. Her debut single, ‘Mirrors’, is one of the greatest debut singles of all time and is an astute pop triumph. It should have made her a star in a post-Gaga pop landscape, but it didn’t.

And now we find ourselves here; where Natalia Kills is now not only internationally known but intentionally derived and hated for what I can only bare to describe as a wholly unnecessary, acidic and relentless triad against some poor contestant on the X Factor New Zealand, where Kills and her husband, Willy Moon, are (or were) judges.

The YouTube video of her attacking the contestant, Joe Irvine, for dressing similarly to her husband has gone viral and ill-opinion of Kills and Moon has spread from YouTube comments, to Twitter, Tumblr, Buzzfeed. Even OK! Magazine.

The first obvious statement is that no matter how much I like or respect Kills as an artist – which was, up until today, an awful lot – this kind of behaviour is unacceptable coming from an artist who was trusted to judge other singers and give them constructive criticism, not tear apart their aesthetic (which, being a skinny suit and slicked back hair, is an aesthetic taken by everyone from Mark Ronson, to Justin Timberlake to Bruno Mars) and deride them on national television in such an aggressive and unnecessary fashion that the contestant looks close to tears.

It’s no surprise that the public opinion to Kills and Moon’s outburst (Moon likened the contestant to Psycho-character Norman Bates and went onto say he – the contestant – would kill members of the audience) was extremely negative; but what is surprising is just how far reaching the news of their outburst has spread and how quickly bad-will towards the pair (but, it needs saying, mainly Kills, being the woman, is targeted far more than Moon, the man) and quickly after the incident, it was confirmed that both judges had been removed from the panel effective immediately.

The two other judges, Mauri musician Stan Walker and former All Saint Mel Blatt were highly critical of Kills on Twitter, Blatt even going to far as to brand her a ‘t**t.’

It’s not just a saddening state of affairs, it’s extremely disappointing to see Kills – who once, honestly, showed so much potential as a versatile pop icon for the ages – lower herself down to this level. Whether it was her intention to create controversy or indeed, as some have theorized, sabotage the show following similar controversies with her husband in the past few days, what becomes clear is now that Natalia Kills is a name that everyone knows – and not for the better. Not for the reason they probably could have known her for some years ago.

As for me, personally, as disgusted and saddened as I am by these affairs, it’s a different thing altogether to say that I no longer ‘like’ Natalia Kills. I’m not sure that’s entirely possible; her music, though underrated, actually formed a large part of my education in the ways of pop music and opened my eyes to other, similar popstars such as Robyn and more recently Say Lou Lou and Ryn Weaver. I know songs like ‘Mirrors’ and the harrowing ‘Saturday Night’ will stay with me forever. Maybe, if ever, Natalia decides, or is allowed to, release new music; I’ll give it a listen. But it will always be an experience tinged with bitterness and sorrow for what could have been, if she had just kept her mouth shut and said something constructive instead.

Natalia Kills has probably (no joke) killed her career; and that’s such a terrible thing for one woman that, once, showed so much promise.