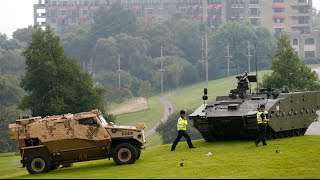 The NATO Summit got underway last Thursday – 4th September – with it being described as the most important and largest ever Summit to be held. The secretary General of NATO, Anders Fogh Rasmussen said: “This summit will shape future NATO, it will demonstrate our resolve, our unity, our solidarity”.

US President Barack Obama arrived at the Celtic Manor Resort in Newport with UK Prime Minister David Cameron after visiting a local school. They were greeted by the First Minister of Wales, Carwyn Jones, and Wales Secretary, Steven Crabb, “Welcome to Wales,” Mr Jones declared. Mr Obama replied: “Thank you for your hospitality.”

This summit got underway as the threat from Islamic State ever deepens. The UK terror threat level was raised from substantial to severe on Friday 29th August, just days after a second American journalist was brutally murdered; posing a huge threat to Obama.

The world leaders discussed the worsening crisis in Ukraine and on the border of Russia.

A 1 minute silence was held at the Summit’s main room to remember the fallen of Afghanistan as NATO prepares to pull out of the alliance later this year.

That evening, the leaders made their way from the resort to Cardiff Castle for a very traditional Welsh meal.

As the sun rose over Newport and the rest of South Wales, the Red Arrows showcased a spectacular fly-pass from Cardiff Bay to Newport’s Celtic Manor. It brought thousands of spectators and the world’s media to watch the military jets, the world leaders looked very pleased.

Barack Obama implied, “It’s a great honour to be the first sitting US President to visit Wales.”

As the evening fell, the world leaders and 2,000 journalists left and South Wales began to return to normal.

The cost of this Summit was £3 million. The security operation was the largest ever to be seen in Britain, it was hailed a huge success.

The NATO Summit has left a legacy on Wales.