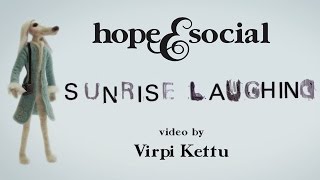 Hope & Social, an indie rock band that have been working the Yorkshire music scene for around 8 years now (formed in 2008), have just released their new brilliantly original and unique album FEEL last Friday. WICID.TV was lucky enough to interview the six-piece band and ask them a few questions about their latest project (see below). The band have been busy since they formed with 10albums/EP’s to enjoy (besides FEEL) and just to name a few here they have; All Our Dancing Days, Architect This Church, Bring the Happy and more.

Prior to the release of FEEL the group released their first single “SunriseLaughing”, an upbeat and vibrant tune that will hopefully keep the warm summer vibes with us a bit longer as the winter nights draw in! It’s a great introduction to what the album contains with a generally acoustic sound and retro vibes. The music video is also an interesting sight to behold, directed by animator Virpi Kettu who worked heavily on Radiohead’s “Burn the Witch” music video.

The album itself is comprised of 9 original songs and interestingly enough all of which have had 9 different animators work on the music videos for each (including Virpi Kettu). I’m sure you’re wondering how the band paid for these artistic videos, well let’s just say Hope and Social are very reliant and including of their fans! All of the band’s music is sold on a pay-what-you-want basis. In a way, an interesting and somewhat important way of rating music! The band is very fond of their fans and always happy to do quirky things like this – a refreshing sight in today’s music industry.

Indie-rock fans, look out for this new project as it’s a great album and if you’re looking for a feel-good joyride of music then have a quick listen and maybe give a bit of support to an original, hard-working and talented band. Check out our interview with the guys below as well as links to some of the bands work and social media pages.

How did you guys meet?

At a cake bake at a crossroads in deepest Yorkshire. It was midnight. The devil was there. He did a lemon drizzle. We did peanut butter brownies.

You have a very unique sound and style, but who/what are your musical influences?

Pretty much everything! We love pop and indie and classic rock and soul and hip hop and jazz and country. We’re pretty big on Prince, Springsteen and Bowie though…. Music that’s big and clever and heartfelt but not afraid to entertain. I’m pretty into Taylor Swift and Die Antwood myself but everyone else thinks I’m a d**k. Although a lot of work goes into it, the music we make just kind of seems to come out slightly uncontrollably. A little like a belch.

What inspired the idea for the brilliant animated music video by Virpi Kettu? And how pleased are you with the video?

You’d have to ask Virpi! We wanted to release a video for each song on the new album so we ran an open competition to try and find video makers prepared to make a video for us! We were blown away by the number of responses. It was a totally open brief so we just literally sent them the song, paid them the money and waited till they’d done whatever they wanted. Absolutely no creative input from us so it’s been really exciting (and slightly scary) waiting to see what people have done! We were so delighted when we saw Virpi’s… We’ll be releasing the rest of videos one by one over the next 2 months.

Why did you opt to sell your music on a pay-what-you-want basis?

When we made the decision at the start of Hope and Social about 7 years ago it felt like a really obvious choice… It felt like the whole music industry was in a state of panic about illegal downloads and streaming and we just felt really positive about it all. We just decided that if people want it for free they’ll get it so make it as easy as possible for them but equally make it as easy as possible for them to give us money if they wish. A clever friend of ours once described the money that changes hands between audience and band as a gratitude payment… On the service someone is buying a CD or download but really they’re saying thank you so we just try and give people reasons to say thank you to us by trying to do nice and things and being nice people. I cannot imagine doing it any other way now…

What advice would you give to aspiring musicians?

Be amazing. Try your hardest to do amazing gigs and make amazing music that is close to your heart. No bad will ever come of trying to do this. If you get anywhere close you’ll be amazed at the opportunities and experiences you’ll have. Everything else just hangs off that… Put all your effort into the art and treat every gig like it’s the most important thing. It’s such a joy to be able to make music with people you love and people applaud it so give yourself wholeheartedly to that joy. Do not give any thought to record labels or anything else boring like that… We meet so many musicians who seem to be always struggling to get to an end point that’s always just out of their reach and I’d encourage people to try and let the art they make be the endpoint.

What are your plans for the future?

Release the album and the videos and play some gigs! We have dates coming up around the UK through October, we’re doing a launch for the videos in Leeds on the 22nd October and just generally try to keep going, not **** things up and get some sleep! We’re so blessed to be in this band and get to do the things we do andI’m determined to keep enjoying it.

FEELis out now and available here. Check out the Hope and Social website for info on their upcoming album tour.