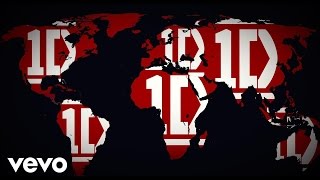 Good news for all you Directioners! The One Direction 3D movie title has officially been announced!

The film, produced by Simon Cowell and directed by ‘Super Size Me’s’ Morgan Spurlock, will be called ‘This Is Us’ and opens in cinemas late August through Sony Pictures.

The 1D3D official Twitter had Directioners across the world help unlock the title by following clues to each letter via One Direction’s social network accounts.
The film is set to be an “access all areas” to the world’s current biggest boy band and will include never-seen-before footage of Liam, Harry, Louis, Niall and Zayn and follow their story after they competed on ‘The X Factor’, introduce their families and explore their dreams as they turn them into reality.

The boys are currently on the UK leg of their ‘Take Me Home’ World Tour and have also been penning some new songs with none other than the boys from McFly.

Not only that, but the boys also recently launched Simon Cowell’s new project, ‘The You Generation’, live on YouTube and even got to spend some time at home for a day or two, which included the 1D3D team filming Louis Tomlinson visiting his hometown and picking up his little sister after school.

His mother, Johannah, told local newspaper, ‘The Star’ that: “He went with the film crew to Hall Cross and Hayfield School, and he went with them to visit his great-grandmother, Olive Rothery. She’s 90 and she’s not been to the cinema for years. She was a natural for the cameras and said she’d never been in a movie. She says she’ll go and see it when it comes out. When he picked up Phoebe she said it was embarrassing because she was in her school uniform. There were about 40 children following them – it looked like the Pied Piper!”

Clearly 2013 has already proven to be a very busy year for the boy band. Personally, I just can’t wait to see what else they have in store.

Are you excited to see the boys in all their 3D glory? What do you think of the title? Comment below!

Related Article: Review: The Adventurous Adventures Of One Direction 2