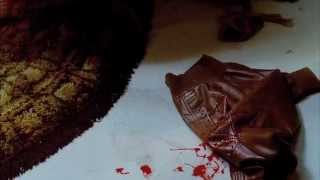 I don’t tend to start a conversation with someone I’ve just met by saying, “Serial killers interest me,” but I confess they do. It’s interesting to see a particular persons motivations behind doing something so utterly horrific, this being the main reason I was turned on to
watching Peter: Portrait Of A Serial Killer, a film blurring the lines between reality and fantasy based on the true story of the Yorkshire Ripper,
Peter Sutcliffe.

Props to the film makers firstly for ‘borrowing’ the title from the famous b-movie gorefest Henry: Portrait Of A Serial Killer, but I’m still undecided on the actual premise of the film. Real news and interview footage is mixed with acted out scenes of Peter being spoken to by God, looking at prostitutes, being assessed in prison etc. The real newsreel footage is very interesting, as you see the level of panic that gripped The North during his killing spree. The actor portraying Sutcliffe captures him with precision (I’d hate to bump into him in an alley), to the extent where sometimes it’s a little too unnerving, but these sections too often lose themselves in a haze of digression and poor dialogue.

That said this film serves it’s purpose, I’m sure it’ll find it’s audience with those just looking for a quick and easy fix and not wishing to get too caught up in the facts. But for those who want to find out more and not sit through strange dramatisations my advice is turn the TV off and get hold of the book Wicked Beyond Belief.