Home » News » Your World » Pirates Of the Caribbean 4: On Stranger Tides 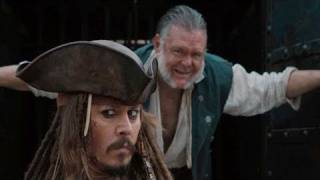 As Captain Jack Sparrow (Johnny Depp) is having trouble finding ‘the fountain of youth’ (Fountain that brings anyone who drinks it back to life), fellow pirate Joshamee Gibbs (Kevin McNally) is sent to court, in name of Jack Sparrow. But the REAL Jack Sparrow comes to his rescue by kidnapping the judge, dressing in his clothes and sentencing him to be ‘jailed for life’. He then takes off his judge’s clothes gives them back and gets into the carriage with Gibbs.
Later, meeting the king of Britain he finds old enemy Captain Hector Barbossa (Geoffrey Rush) as a Privateer with only one leg (But really he wants to find BlackBeard to seek revenge for his limb). After captain Jack escapes the kings palace he searches for someone who ‘Copies him’ and finds out that it is his past girlfriend Angelica Moon (Penelope Cruz) who betrays him and gets a pirate to shoot him with a sleeping dart. He then gets taken onto Captain BlackBeard’s (Ian Mcshane) ship who also searches for the ‘the fountain of youth’.
But… so are the Spanish, who are ahead of them and have the two chalices needed for it to work, so the British are after Captain Jack Sparrow, and the Spanish and BlackBeard are after ‘the fountain of youth’. They get to the Spanish Camp and take the two chalices, Cpt jack gives them to BlackBeard and tells Gibbs to go free (but he gets the ships in a bottle first) and Cpt. Jack carries on, they then get attacked by mermaids (which are deadly) and BlackBeards men catch one and keeps her as a prisoner so that he can get her teardrop in order to live forever.
After they find ‘the fountain of youth’, BlackBeard and his crew (and Captain Jack) come face to face with the British royal army and Barbosa (But the christian prisoner falls in love with the mermaid and tries to set her free). They all start to fight but then the Spanish come and crush the two chalices and throw them, and then fight both teams. Barbosa finally stabs Blackbeard as his daughter (Angelica) gets the sword out and also cuts herself, Captain Jack then tells her she will die because she was cut with poison (which was on the sword) Cpt. Jack then finds the chalices and gets the water (and mermaid teardrop) and gives them to BlackBeard and his daughter. (The one with the mermaid tear brings the person back to life) Blackbeard takes the one with the mermaid tear in and drinks it and tells his daughter to save him. Little did he know that Angelica drunk the one with the teardrop, BlackBeard then dies and Angelica and Cpt. Jack sail to the desert island, he leaves her there and finds pirate Gibbs, who has a sack full of ships in a bottle (which form into real ships) and has his one “The Black Pearl”
His Journey carries on…