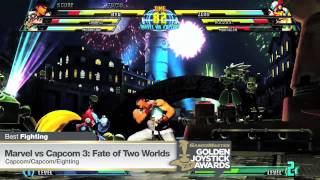 Claimed to be the biggest video game award ceremony in the world, the Golden Joystick awards was held at Westminster Bridge Park Plaza on Friday 21 2011, its twenty ninth award ceremony for the gaming world.

And it was good news for Valve, as their well-known title Portal 2 won Ultimate Game Of The Year, beating competition such as Assassin’s Creed: Brotherhood, LA Noire and Pokemon Black/White among others.

The first-person puzzle-platform game has been praised for its humour, with Stephen Merchant (The Office, Extras) had extremely positive reviews for his portrayal of a “personality core” called Wheatley.

EA Sports, creator and developer of sports games, once again earned the title for Sports Game Of The Year with its FIFA series for the third year in a row. FIFA 11 beat its rival Pro Evolution Soccer to the title.

Sega was also recognised for their contribution in the gaming industry, as the award from Outstanding Contribution was awarded to its mascot, Sonic The Hedgehog. The Sonic series is celebrating its twentieth year since being first unveiled by its creator.

It was also good news for the Finnish computer game developer Rovio, as their newest version of Angry Birds took the Mobile Game Of The Year with Angry Birds Rio.

The Sonic brand director, David Corless, stated that the hedgehog was a timeless character who had transcended video games and whose appeal had been extended by the boom in smartphone gaming.

“It’s quite rare in any forms of media that TV or cartoons for kids can endure for such a long time. Even in a video game it’s quite rare.

“The fact that Sonic is still around and still doing as well as he is is fantastic, and testament to the little blue blur as we call him.”

Corless also added that the traditional rivalry between Sonic and Mario is now a thing of the past.

Here’s a full list of winners of this years Golden Joystick Awards.