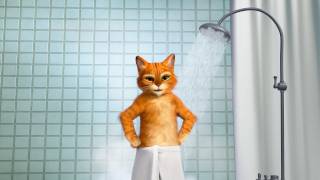 Through the years he has been known by many names: Diablo Gato, the Furry Lover, Chupacabra, Frisky Two Times and, then, the Gingerhead man. But to you and me he is known as Puss in Boots; once the feisty sidekick, now the star of his very own full-length feature film.

I, along with many others, believed that Dreamworks should have packed in the Shrek franchise after his journey to Far Far Away, before things got out of hand. It would be fair to say that Shrek the Third had none of the charm and original comedy of the earlier instalments, and I made a stand against even seeing Forever After. However, after winning the fandom of many in his debut in Shrek 2, Puss in Boots (Antonio Banderas) was destined to star in his own spin-off film, whether the public asked for it or not.

My expectations were low as I bought my ticket to PiB, and if it wasn’t for the appalling reviews of Happy Feet Two I perhaps would be writing a very different review right now. In fact, the only reason I decided to see it at all was because of a trailer I’d seen that mirrored the Old Spice advert. I really love that advert. But with Dreamworks’ insistence to draw every drop of life out of its greatest success with needless sequels niggling in the back of my mind, it seemed that this could be make or break for the whole series. Fortunately, they managed to strike a chord. Puss in Boots, despite my first impressions, actually proved to be just as hilarious as Shrek at its greatest. This is me, standing corrected from judging a book by its cover. Go on, say it. FOR SHAME, BETHAN.

Puss in Boots is a spaghetti western / Latino hybrid, set quite a few years prior the adventures of Shrek. Here we learn that Puss was not born a legend among men, but an orphan who earns the famous boots which he must continue to fill. Puss’ shady past with former partner-in-crime Humpty Alexander Dumpty has put a large bounty on each of his whiskers, which he is all too keen to rid himself of via an almost impossible task.

The jokes tended to revolve around two main topics – “Hehe, he’s a cat that acts like a person” or “Hehe, he’s a flirtatious Spaniard”. However, the two seemed to work. From the opening scene, which shows our Puss awakening from a one night stand, the film is filled to the brim with sexual innuendos and ‘punny’ humour to keep the older viewers in rapt attention. Although every golden-egg-means-male-genitalia and the-cat’s-a-sex-pest joke was completely inconspicuous to the younger viewers, I had the distinct impression that the parents in the theatre were much more the target audience than the children. Humpty did indeed have the biggest laugh in the theatre after one breakfast/jail-related pun, and that in itself made this film worth watching.

Of course, the children had their laughs too, and I am very pleased to say that not all of my favourite parts made it into the trailer. Equipped with its very own version of the ‘do the roar’ kid (the most, albeit only successful part of Shrek Forever After), the movie had stuck to the fairytale theme throughout, with special appearances from Little Boy Blue and of course, Jack and Jill, the villainous couple with a strange affection towards scary-looking pigs. The adorable kitty-cats chased discs of light and meowed cutely for the affection of the audience, allowing cat-owners to draw parallels to Mr. Tiddles back at home. Even Puss himself falls in love with a mysterious ‘bad kitty’, who’s soft paws can even pull the wool over our hero’s eyes.

I will admit that I almost cried (but I didn’t actually shed a tear, so it doesn’t count) at the slightly poetic ending, where everything suddenly becomes very deep and meaningful for Mr Dumpty in particular. The story, although some may consider it to be weak, even outlined the effect of bullying on children who are different from you… or maybe not, I may just be looking into it far too much. Nonetheless, the usual components of a good children’s movie are all there: a love interest, exciting and fast paced fighting scenes, friendship, reconciliation and honesty. My one regret is not seeing it in 3D, as the graphics in 2D alone were fantastic and I found myself pondering where and when the 3D would be at its greatest.

A much better spin-off than you’d expect from the people who brought you no less than 8 mediocre Shrek short films and 2 more sequels than was required. I’d give it a well deserved 4/5, and recommend it to fans of Spanish outlaws, cats and sexual innuendos alike.

1 thought on “Puss Has Big Boots To Fill”