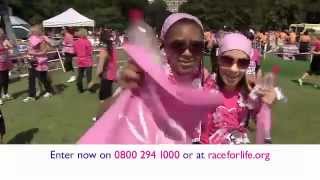 Sunday 15th July. A date where I made myself proud. Why? Because I participated in and completed the Cancer Research UK’s Race for Life.

About two months ago, my mother and I were talking about problems that occur in our lives whilst watching Only Fools and Horses. When the adverts came on, the Race for Life advert appeared on our screen. That’s when my mother turned to me and said “We should do that, you know”. Forget about our problems and help those whose problems are very serious.” My first reply?

We agreed that it was a good idea and signed up. Over the weeks leading up to the race, I worked hard in trying to get sponsors, in my training and raising awareness of Cancer Research UK.

Sadly, during that time, my uncle was diagnosed with cancer. And this case was (and still is) untreatable. Obviously, both my mother and I were (and still are) devastated at the fact, but we refused to give up. Having now going through what it feels like to have a cancer fighter as a relative, we could actually feel how horrible it really is for cancer patients’ families and we felt as if we couldn’t back down.

Let’s skip onto the day of the race. I had to get up pretty early to catch 8:20am train. I’m not a morning person, but I was really looking forward to the day ahead.

During the train journey, the train filled more and more with women in pink. It just gave me this feeling inside. We’re all in this together to make a difference. To save lives. When we got to our train stop, a sea of pink flooded throughout the train station and headed to Bute Park, Cathays – our destination for the day.

The walk to the park seemed rather long. We suddenly passed a lot of pink ribbon, which made us think it was there to guide us. Then we saw a “2KM” sign. We’d only gone and walked up the flipping course. Oh well, at least we knew our way.

When we got into the park area where the event began, the music pounded through our bodies, the sea of pink got bigger and bigger and the atmosphere was amazing. My mother and I saw a free back massage area, so we weren’t going to miss that opportunity, I can tell you that now. We had a quick massage – which felt amazing. My back felt so much better before heading down to the stage. We were at the front at first until halfway through, when we decided to go to get a Race for Life t-shirt (which had all of the 6,500 participants names on there). There were two people from Capital FM presenting on the stage with dancers now and then and then the “Vaseline warm up team” came and warmed us all up. Imagine this: six-and-a-half-thousand women from all backgrounds, different parts of Wales, all bopping about to a remix song. It was pretty funny, mind. None of us had a straight face.

When the time came, everyone went to the correct flag (runners, joggers and walkers) and were led to different places. The walkers were the last lot to be taken to the starting line, so as we waited for the runners to take their positions, we were told to do a Mexican wave for their Facebook page. We were towards the back for this, and I wanted to be in the photo so what did I do? Jumped up in the air when it was our turn to raise our hands. I don’t think it worked, mind.

With the racers ready, we counted down from 10 for them to start. It was pretty emotional because it was on a big screen and they filmed them going off. It hit me. “This is it. The big event. What we are doing for cancer.” So I was a little choked up. We waited for the joggers to set off, before finally making our way to the start line. Reading people’s signs on their back with the name of whom they were racing for was so emotional. To see little kids with “in memory of my mother” and photos of the people who were related to the racers was touching and it hits home about how serious it is.  There were a lot of dogs also participating and one even had a sign saying “speedy paws for a good cause” written on it which was dead cute.

The race began, and we all started walking. The first K wasn’t so bad, but each one seemed longer and longer. Just after 2KM, we saw a familiar face. It was only Sir_Clucky sitting on a bench to support us! We gave him a wave and he walked over and did about half a K with us before giving up and heading off to town to shop. Couldn’t blame him really. It was tiring. Halfway through the race, my ankle decided to spazz out and hit onto the floor. It was pretty painful but I carried on.

At the 4KM sign, another familiar face popped up. Tansi from The Sprout was there cheering us on and walked the rest of the way with us, behind the banners. As we came to the final meter, I thought “let’s do this.” and ran it. Everyone cheered and the woman from Capital FM said to me through the mic “Well done, lovely! You did well!” and I had a smile on my face. I collected my bottle of water, my medal and my goody bag. Tansi greeted me with a big hug and we all headed off to find somewhere to sit. There were massive beanbags laid out, so we instantly dived on them. We had a look around (and had another massage) before leaving.

Race for Life is amazing and I would recommend it to anyone who is eligible to enter. I also strongly advise that you warm up and train for the event. You will obviously feel some sort of pain after, but it’s nowhere near as bad as the pain that cancer patients go through. I really hope to enter again next year, or if not, volunteer at the event.

Well done to anyone who also entered the race and thanks to all who sponsored me.  You really can make a difference. Together we will beat cancer.