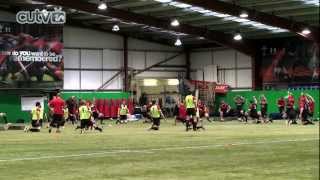 Rob Howley and his coaching team have named the 35 man squad for the 2013 RBS 6 Nations tournament.

After last year’s success on winning the 6 Nations, Grand Slam and Triple Crown, interim manager Rob Howley said: “We have a group of players who know how to win big matches and have experienced success”.

Below you will find the 35-man squad, including which regional clubs they play for:

The fixtures for Wales are:

Let’s hope we can do the same as last year.