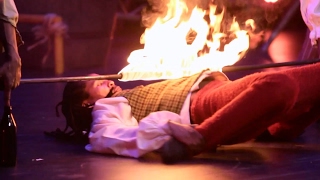 Cirque Berserk is breath-taking, jaw-dropping, adrenaline pumping and heart stopping fun for the whole family to enjoy. Don’t be mistaken, this is not a review of a circus. It’s a review of a Berserkus!

A Berserkus is similar to a circus but is performed on stage. 35 very skillful performers did more than 30 amazing circus skills on the stage of Cardiff Bay’s Wales Millennium Centre. The exhilarating acts come from across the world including Columbia, Cuba, and The Czech Republic. The acts are performed without safety devices, which make them even more thrilling to watch. I had goosebumps while watching some of the terrifying and acrobatic acts. The performers had joules of energy while flipping from one side of the stage to the other and jumping through burning hoops of fire. They also had a perfect sense of balance while doing their acrobatic art. Tweedy Clown brought many laughs from the audience with his hilarious slapstick comedy. In my opinion, the highlight of the show was the motorbikes in the globe of death at the end. There was a globe with about a 7-meter diameter and a motorbike was twirling around going in every direction around the globe. But suddenly another bike came in, and another and another. By the end, there were 4 motorbikes in the very small space driving upside down in circles!

The staging looked incredible: flashing lights, loud music, large props with things hanging from the ceiling and the colourful performers. The performers used the props expertly to enhance the comedy and add to the drama, special effects add tension. The Cirque Beserk was fantastic. The risk element draws you closer to the edge of your seat and makes you hold your breath due to the endless list of things that could go wrong. They encourage you to use your phones during the show to take pictures and videos so that you can share the amazing experience. The acts are performed perfectly and it’s lots of fun for everyone to enjoy. It is being performed in the millennium centre between the 28th of March and the 1st of April.