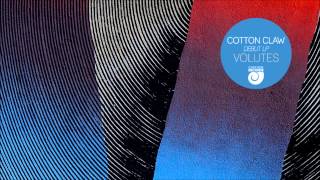 The French electronic scene embodies European dance culture and Cotton Claw is no exception in the description of the future of continental floor fillers. Headed by four French native producers, 2015 will be a year to watch out for Cotton Claw as they are set to release their debut LP, Volutes.

In the same niche market as a majority of its British counterparts e.g. Julio Bashmore, George Fitzgerald and Jamie XX, the French market has tended to stay predominantly European. This struggle to cross the channel is apparent and something that I hope Volutes will help in curbing the gap in the markets.

Introductions to Cotton Claw are weaved together well in the opener, ‘LEAPS AND BOUNDS’. It’s slow paced attitude wouldn’t seem out of place on the dance floors of any old, average, nightclub. Some might call this the album’s safe track, blending into the single track ‘GRAINY’ as if the confinements of tracks were no longer a thing.

The lead single takes more of a grittier turn with the rhythmic progression we tend to see in underground clubs across the country. It holds no prisoners using its synth-laden hook to resonate in your head. Yet on the other hand it becomes very repetitive equally as quick. You would think in the same genre the music is all the same. Well, you’d be wrong as the movements of each track play small parts in the listener’s perception of the track and the most minuet change is pivotal.

‘GRAINY’ just becomes repetitive and it only has a 5-minute time frame in which to do this.

Breaking down such tracks as ‘HORNETS’ and ‘SUNSET GLOW’, a theme starts to emerge. It just doesn’t feel as if 4 people have collectively come together to produce a body of work. It starts to feel like it could have been produced in a bedroom by ‘that guy you met on the bus last week’. In Cotton Claw’s previous work the production value has been more apparent because of the dedication that probably went into the EP. This LP feels a lot less structured and well rounded.

‘RAZZLE DAZZLE’ utilises the vocals of a female singer in a sample, which sounds redeeming amongst its Noir style backing track. ‘NOULAFE’, integrates a timeline of interesting and intriguing time signatures luring you into a false sense of security before the next signature change. Clever use of a synthetic brass section sounds triumphantly big and makes for an apt change on the record.

‘TIME TRIAL’ starts off as an uneasy song to listen to but again uses a ranging spectrum of scales, which make for a good musical story and something for the listener to progressively become a part of. The female vocals sound sublime, like what would happen if Amy Winehouse and Passion Pit were to have a love child. ‘VERTIGO’ using an intricate ‘music box’ sample, the song over time becomes this larger-than-life and epic song much like ‘TWERK DAT NIP’.

I noticed throughout the review that the album plays through in four different sections. Each side of the LP acts like a different story. The first three tracks narrate the introduction, as do the second and the third. When we come to the fourth section, we have discovered a more learned and mature sound from Cotton Claw. With stylings from such artists as James Blake and SBTRKT, the band starts to emanate some of their different influences as a collective.

The three final tracks, act as an outro of sorts with ‘SOAKING METHODS’ showcasing the scattered vocals that we’ve come to expect from some of our favourite artists within the genre. Its also clear that Cotton Claw’s stamp is well on surely on this album.

A style of progressive, repetitive music with scarcely used examples of sampled lyrics, marauding baselines and just that absolute manic timeline of synths. This LP is designed for the music lover, the lover that separates tracks individually and this is just candy to the ears. This stylised sectioning of tracks, makes for a love it or hate it approach to the LP, which I’m sure will divide the music community. Slow to start but all in all a classic Euro-Noir dance LP.