Home » News » Reviews » Review: The Curious Incident of the Dog in the Night-Time @ Wales Millennium Centre 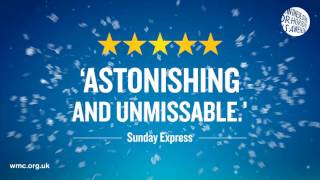 Despite the title, the dog doesn’t last very long. In fact, it’s dead as the curtain goes up. You can see it in the middle of the stage with a garden fork through its belly. The Curious Incident of the Dog in the Night-Time, with 7 Olivier awards (the record until 2017) and 5 Tony awards, has finally arrived at Cardiff’s Millennium Centre.

It’s no surprise that the play has won so many awards. This play has a very powerful story which affects everyone with a cocktail of different emotions, from gut-wrenching comedy to tear-jerking sadness. In my opinion, Sam Newton is a superb actor and was very effective. The way the set is used to demonstrate the thoughts of the main character is astounding throughout the play. The Curious Incident of the Dog in the Night-Time follows a mystery surrounding the death of a neighbour’s dog that is investigated by young Christopher Boone, who has an autism spectrum condition, and his relationships with his parents and school mentor. There are some very sad, as well as truly hilarious moments in the play. The production reworked the literary title and presented it as a play-within-a-play.

The play is well known for its fantastic set and use of special effects. The set is a large cube with black walls on the sides that the characters can put chalk on. There are also hidden cupboards in the walls with useful props. The lighting is used effectively to try and portray the mind of Christopher. You can clearly see many drama techniques by reusing light up boxes and using the chorus as objects. I have never seen a production using special effects as effectively as this one!

The main character, Christopher, is portrayed brilliantly by Scott Reid. He talks and you nearly forget he is acting – it’s clear he was emotionally and physically invested in this role. He even does a few flips and walks on the wall in one scene! All of the actors gave fantastic and memorable performances, making their characters believable and relatable.

I highly recommend you go see this play if you get the chance. The story is very special and inspirational. It captures the feel of the book very well and the special effects were out of this world. Under the remarkable directorial guidance and creative influence of Marianne Elliot, the cast and crew work in harmony to pull off this fantastic production. There is no other play quite like The Curious Incident of the Dog in the Night-Time – I’ll remember this one for a long time!

Tickets for the remaining performances can be purchased here: https://www.wmc.org.uk/Productions/2017-2018/DonaldGordonTheatre/CuriousIncident17/?view=Standard