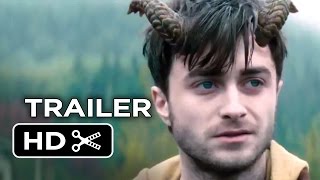 CLIConline has teamed up with Vue to provide members of the CLIC National Editorial Group and members of editorial groups in the CLICcollective with review tickets for the latest films. Want to get in on the action? Email Ryan@CLIConline.co.uk

I bring you this review about the new mind-confusingthriller Horns (15, 123 mins), starring Daniel Radcliffe. The movie is based on thenovel of the same name by Joe Hill. The film is directed by Alexandre Aja, whohas also produced, written and directed the film, Piranha 3D.

I’ll jump straight into the storyline so, beware, there are going to be spoilers ahead. Hornsis about a young guy called Ig who is accused of raping and murdering hislong-time lover, Merrin. Ig and Merrinhave been in love since they were young kids and throughout the film you seeflash-backs of they past and how their love transpired to be as strong as it istoday. After his girlfriend dies, Ig wakes up one morning with horns sproutingfrom his head. Weirdly, nobody seems to be bothered but the horns give Ig some sort ofparanormal abilities as to the point in which he can see nothing but the truthfrom people and what they really think.

Ig, along with his long-time friend, Lee,try to solve the case of Merrin’s murder and clear Ig’s name. During a flash-backof when Ig, Lee, Glenna and Terry were youngfriends, they would blow up objects using cherry bombs, butwhen they used five of the six cherry bombs, Ig got dared to ride down a rampand into the sea naked in return for the last cherry bomb. As Ig did the darewithout hesitating, he hit the water with an almighty thump, and logs cametumbling down onto where he entered the water so he couldn’t come back to the surface to breathe fresh air. By this point, hisfriends get really concerned and Lee jumps into the water and drags Ig from thesea to dry land and then Ig collects his cherry bomb for completing the dare he hadbeen set.

Ig then also has another flash-back, where he’s in churchand a young girl called Merrin was shining a light into Ig’s eyes using across around her neck. Ig then took this as a signal that she liked him, butwhen it came time to leave the church Ig when over to speak to Merrin and sheweren’t there. Instead he found a cross with a broken chain on the chair, thesame cross in which Merrin was using to flash a light into his eyes during thechurch service. Ig then took this cross to Lee and got him to fix the chain sohe could return it to Merrin. In return for fixing the chain, Ig gave thecherry bomb he had to Lee – he then later that day gave the cross necklace backto Merrin after taking her to his secret treehouse in which he used to get awayfrom people. From there their relationship started and continued to blossom.

During the middle of the film everyone starts to hateIg, labelling him a murderer and claiming he’s the devil. Ig has anotherflashback of the night Merrin died, he planned on going to meet her at a dinerand then propose to her but Ig arrived to a shocking confession from Merrin.Merrin was sat in a booth upset, and told Ig that they should stop theirrelationship, but then Ig starts to get mixed emotions and gets quite frustratedand asks Merrin is there someone else that’s she’s in love with. Merrin justlooks at Ig with a sorry-looking face, which confirmed Ig’s thoughts. So, then, Ig gets in his car and leaves the diner in afrustrated mood ignoring Terry as he arrived. Ig then confronted Terry, butwith Ig’s paranormal powers, through skin contact, Ig could see what Terry knewabout the murder of Merrin and the night she had died. Ig’s vision showed thatTerry had driven Merrin home that evening but on the way home, Merrin requestedto get out of the car while on a dark road in the pouring down rain next to aforest. As he waited in the car for her thinking she just wanted some time toherself, Terry dozed off and woke up the following morning with blood on hishands, shirt and a rock right next to him. He then became a main suspect of Merrin’sdeath in the eyes of Ig.

Ig then went and told this information to Lee, the onlyperson who was unable to see the horns Ig had grown out of his head. Ig thenrealised that Lee had a cross necklace which looked exactly the same asMerrin’s. But, when Lee gave a blank expression on his face when Ig askedwhere the necklace came from, he then knew it was Merrin’s cross. Ig grabbed thecross from Lee’s neck, then as of that moment Lee was then able to see the hornson Ig’s head. Lee then confessed to Ig about the murderof Merrin and that he done it. Ig used skin contact to see what transpired thatnight she had died – Ig’s vision showed that he found Terry asleep in his car,then went into the forest looking for Merrin and requested her love, whenshe said she didn’t want a relationship with him and that she loved Ig with allher heart, Lee got jealous and then killed Merrin under the tree that she andIg had gone to regularly to spend time together since they were young kids. Leedidn’t want the truth getting out about hismurdering ways; he rubbed the blood all over Terry and put the rock next to himin his car for when he wakes up the following morning.

Ig and Lee then started a fight, in which Lee burnedIg in his car, while Ig drove into the sea. Lee then went on to tell everyonethat Ig confessed to him that he was the murderer of Merrin and committedsuicide as he couldn’t face anyone – although strangely Ig survives the fireattack. Ig went to the treehouse in which they spent a lot of their time, andopened the hatch which he used as asecret storage place and he found a box. Inside the box Ig had found a letter fromMerrin, which stated that she had a really bad case of cancer, and that sheknew Ig wanted to marry her, but if she told him that she was really ill itwould make him want to marry her even more. She went on to say that the onlyway she could go about things was to try to hurt him to the point they break upso Ig never had to see or share the pain she was going through. Although Ig wasupset that not only had she been murdered but she had cancer, he was so pleasedthat they didn’t break up due to her wanting to leave him, but only because shecared him about him so much not to let him see her in pain.

After this, Ig went to Merrin’s father’s house and explainedeverything to him and after a little confrontation, Merrin’s father invited Iginto the house and explained to him that he loved his daughter very much. Iggave Merrin’s necklace to her father who then gave it back to Ig by saying”…you need this more than I do,” and as Ig put the cross around hisneck, all the burns and the horns Ig had on his body disappeared. Ig thenwent to confront Lee who was surprised that Ig wasn’t dead, Terry and Eric alsocame along too. Terry had already told the truth about the murder toEric, who at this point had become a cop. Eric points a gun in Lee’s direction,but as Lee gets hold of it, he kills Eric and wounds Terry in the knee. Undergun point, Ig had enough, and said to himself “…I’m sorry Merrin, I’ll seeyou soon,” and rips Merrin’s cross off his neck and turns into ademon-like creature. He then beats Lee and kills him.

Personally, I enjoyed this film very much. I thought it wasvery well thought-out, but could’ve had a bit more CGI effects. On the wholeit’s a decent film to watch.

My recommendations are – do not watch if you arelight hearted or have a weak stomach as some graphics you may find disturbing.You also need to pay attention when watching, as it tends to make you think alot.

This film was released in the UK as of 29th October 2014. It’s screened all over the UK in many cinemas including the VUE Cinema inMerthyr Tydfil. Check out your local cinema times, by clicking the link belowand there’s another link to watch a trailer for Horns too.

Info » Things To Do » Interests » Cinema

Info » Things To Do » The Arts » Acting, Drama And Theatre