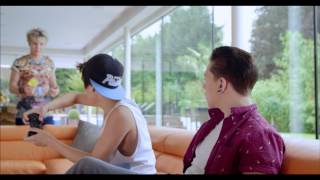 Tuesday 18th February saw the M.A.D tour hit Solus, Cardiff. Before the tour, I had only ever heard of them from a good friend of mine and heard their two singles: Toyboy and Fame & TV. When CLIConline offered me the chance to interview their support act, Vanquish, and review the show itself, I gladly took the chance.

After the interview with Vanquish — who, by the way, are lovely girls — my friend Cerys and I were taken to the press pit. It was crazy because we were literally the only two people in it. It was great to have enough room to be able to walk around and take photos without other people from the media trying to battle over the best shooting spots.

Vanquish were first on and I think they shocked the crowd with how talented they actually are. Pre Vanquish set, the audience only seemed to care about the boys of M.A.D, but as soon as the girls took the stage and dazzled us with their stunning performance of their own songs and covers such as Really Don’t Care by Demi Lovato and Cher Lloyd, and a James Arthur cover, the crowd instantly fell in love with the up-and-coming sensational girlband, especially when they performed their new single Damn.

Although there’s a girlband vibe around Vanquish (well, obviously, since they are one), this is a no-frills girlband and definitely aren’t all about high heels and tiaras. That’s something I really admired about these four girls. They were bold, fun and the type of artists you turn up on your iPod when you’re getting ready to go out.

Soon after were they boys themselves: the M.A.D my friend kept on about yet I still wasn’t sure on who they exactly were or if I was going to like them. I soon found out once they burst onto stage like three big bundles of energy that yes, I indeed have grown to become fond of them — especially when they covered two One Direction songs and didn’t make me regret attending the event. They did quite a lot of covers, but my three favourites were Best Song Ever, Little Things and Busted’s Year 3000.

Despite being a boyband, they didn’t have the typical stereotype attached to them. They just seemed like three boys from school who knew how to party and the vibes that the audience got was such a buzz and looking back at the audience, it really did look like a party more than a gig.

The boys also sang their two singles — Toyboy and Fame & TV which are also very catchy and had the teenage crowd bouncing around and singing their hearts out. So catchy, in fact, that I can’t get Toyboy out of my head, even though as I write this, I’m listening to another genre of music completely.

What I really liked about the show is that in between some songs, host Geraint from Capital FM got the fans interacting including a quiz with some lucky fans who competed for a chance to win a hug and kiss from M.A.D.

The overall gig was brilliant and the connection with the fans was something I really appreciated as, if the boys become the next big thing, interactions between the boys and fans will become harder and so this is something that long-time fans will always be able to appreciate and remember.

Info >> Things To Do >> The Arts >> Gigs, Concerts, Events and Festivals

My Review On M.A.D’s Concert