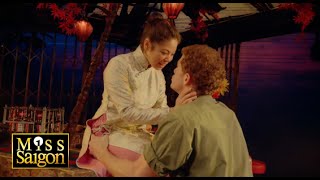 After hearing my best friend rave about the musical, I knew I needed to review Miss Saigon as soon as the opportunity was presented to me. Admittedly, I was a little bit nervous after briefly reading a synopsis of the storyline as I thought it wasn’t something that appealed to my tastes and interests; however, I was blown away by how much I not only enjoyed the performance but the plotline and every other aspect of it.

Miss Saigon follows 17-year-old Kim during the Vietnam War – specifically between the years of 1975 and 1978 – where an American soldier, Chris, falls in love with her on her first night working as a prostitute. As a sucker for love, I was entranced by the storyline and the immediate and prevalent passion between Kim and Chris. Their infatuation and love could be seen and also felt throughout every scene up until the very end.

Immediately Kim’s age interested me as I, myself, am 17 years of age and it was both interesting and heartbreaking to see how someone of that age was treated. It’s unbelievable how much the world as a whole has progressed as although these things do still happen and are still a big problem, they are less frequent in today’s society. Despite being aware of the 15 age rating and the warnings of a sexual nature by my best friend, I was still surprised by how much sexualisation and profanity there was. (This was probably due to the previous performances I have seen excluding this aspect). However, the impact of the musical wouldn’t have been as stark if these things were not included as it showed what things were like during those times in a raw atmosphere.

The voices of the entire cast were astounding. Each voice was both soft and powerful when each aspect was needed; the silky smooth voices of the cast caught everyone’s attention and the amazing high notes and effortless belts kept everyone blown away and entranced in each character and scene. The acting as well was on point not only during scenes but during songs as the emotion engulfed in their voices left me and others speechless in our seats.

I cried three times throughout this musical. A scene I was definitely not prepared for was ‘Bui Doi’. Again, the raw emotion in John’s voice and the song’s lyrics brought tears to my eyes in conjunction with the emotional images and videos being shown on a screen behind him. The heart-wrenching history in that scene was met with teary eyes and ear-piercing applause. Additionally, when Chris is finally informed of his son’s existence, Kim begs his new wife to take Tam to America with them to give her son the life she never could. The phenomenal acting in this scene sent shivers through my body and caused tears to fall down my cheek once again. There was true pain ricocheting from Kim’s voice around each wall of the theatre that made the hairs on my arms arise in goosebumps.

Furthermore, at the end of the musical when Chris and his wife, Ellen, have come to meet Tam for the first time, Kim uses her gun she previously used to save her son’s life to take her own. This scene resonated deep within my heart and my memories as this is something that has affected me personally and I will forever be sensitive to. Watching this tragic scene unfold left me sobbing in my seat with my hand clasped over my mouth to the melancholy being played out on the stage.

This is definitely a show I would jump at the chance to experience again and would recommend it to anyone. A phenomenal production expertly executed by the entire cast, crew, orchestra, and other members of the team. A show that will forever resonate with me.