Home » News » Things To Do » Review: One Direction Live 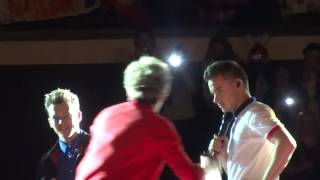 It’s fair to say that One Direction have had the best two to three years of their lives.

After proving to be highly popular on Britain’s biggest talent show, The X Factor, the five heartthrobs have lived up to their name and gone in one direction and that direction is up.

Cardiff was the boys’ destination for the weekend and performed four shows in three days at the Motorpoint Arena (CIA).

The wait was long but totally and utterly worth it. The capital of Wales saw thousands of fans throughout the day, full of enthusiasm, during the build-up to the arena doors opening at 6 p.m ready for an unforgettable night. Unforgettable was exactly what it was.

No two One Direction performances are the same as the boys keep things fresh and are always showing off with their cheeky attitudes and playful banter amongst themselves and the crowd.

Friday’s performance included Niall Horan’s amazing Welsh accent, a large daffodil held by Harry, a story about Louis and the milkshake mishap during the X Factor Tour in Cardiff and your average banter from the boys. Oh, and 10 points for Harry’s effort to say Wales in Welsh!

Halfway through the performance, the band floated over the audience and arrived on a platform in the middle of the arena and rocked out to their charity single, a cover of Blondie’s One Way or Another and answered a few questions on Twitter before performing again and returning back to the main stage.

This was truly amazing as you were guaranteed at some point throughout the show to have a decent view of the teen sensations.

I could go on and on for a good few hours telling you so many details of the whole performance, but I’m afraid that neither you nor I have the time for that. However, I can assure you that the concert was goddamn amazing and I shall treasure every moment there.

Even the moment where the boys were late to their encore due to Niall’s full bladder (bless him).

I’d like to thank CLIConline and Wicid for this amazing opportunity and Camryn for helping me set this up. I have no idea how to repay you guys!