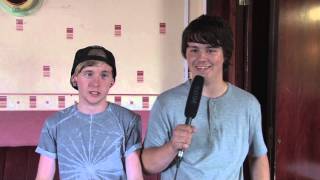 The last day of Media Week was the day of the Rock Factory show. There were 10 bands performing altogether and they were all really good. The night started with a band called ‘Spiders’, then you had ‘The Deadlines and Dan’, third to perform was ‘Lance and Dan’. After that there was ‘Lance, Oliver and Rachel’. Then the fifth band to play ‘Kids of Alcatraz’, then ‘The Aces’, then ‘The Pitchforks’, then a solo artist called ‘Rachel’. ‘Friend of the Foe’ then took to the stage and the last band was ‘The Counterfeits’.

All of the bands were amazing and it was good to see that all of the bands, except one, were teenagers and you could tell how much fun they were having.

The genres were mostly punk, rock and a little bit of pop. There were songs from ‘Zombie’ to Green Day songs such as ‘American Idiot’, ‘Boulevard of Broken Dreams’ and others.

There was even a cover of the Batman theme tune, ‘Seven Nation Army’ and some Metallica songs.

The bands I really enjoyed were ‘Kids of Alcatraz’ which included Jack on drums, Adam and Natasha on guitar and Rachel on vocals. They were really good and these are just one of the bands that worked really hard and enjoyed themselves.

I also enjoyed ‘Rachel’ singing her own song: ‘Magic World’ and the song she covered – Ed Sheeran’s ‘The A Team’.

Overall, every band was good and there’s definitely talent in Tonyrefail. Also, the audience were awesome as they were very supportive towards all acts.

So, the night was really good and I enjoyed watching all the bands. Media Week was also good, I really enjoyed the creative writing course and watching the film about the bands and being around the people that were there.

I can’t think of a better way to end the week – I can’t wait until the next Rock Factory.