Home » News » Things To Do » Review: The Adventurous Adventures of One Direction 2 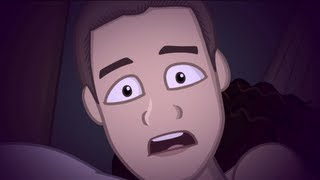 Attention, Directioners! This is something you’re guaranteed to love. If you’re part of the 1D fandom, you’ve probably seen The Adventurous Adventures of One Direction, right? You haven’t? Then go watch it quickly and then we can continue. *Sigh* Yes, I’ll waitâ€¦

You’re done? Good. So, now you know that AAoOD (yes, I’m shortening it) is a cartoon fan fiction written and animated by American teen, Mark Parsons. Well, after a long, agonising nine months of waiting, fans were delighted on 18th/19th March (depends on your timezone) when Parsons uploaded The Adventurous Adventures of One Direction 2! (Or, AAoOD2 for short.)

The cartoon features the teen sensations, One Direction, as they attempt to stop Mega Fan from destroying the world. The cartoon also features some well-known, and perhaps not so well-known, facts about the boys including Liam Payne’s unusual fear of spoons and Niall Horan’s love for Nando’s and general love of food.

If you know your films, you’ll also notice a parody scene of Pink Elephants on Parade featured in Dumbo (although some people are mistaking it for Heffalumps and Woozles in Winnie the Pooh and that irritates me because I’m a Disney nerd, but we’ll let it slide) and one of the characters turning into Gollum from Lord of the Rings.

The 30-minute YouTube video reached over thousands of views in less than 24 hours of Mark uploading and has now reached over 5 million views.

Fans have been going crazy for this sequel since the first AAoOD which was first uploaded back in May 2012 and even caught One Direction’s attention.

I really, really enjoyed this cartoon and I hope that there will be another one in the future. It was so fun to watch and I cannot express how much I respect Mark for putting all the time and effort into creating it.