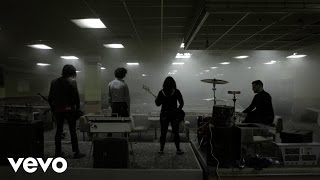 Three and a half years in the waiting, and the busy band that is Turbowolf are set to release their second album, Two Hands, and follow up to the acclaimed self-titled debut. The Bristol-based quartet have been touring relentlessly over the last 4/5 months; giving fans a taste of what to expect from the April 6th release.

The band is set to head out on the road again with a headline tour across the UK. So, who are Turbowolf? Comprised of Chris Georgiadis (vocals/synth), Andy Ghosh (guitar), Lianna Lee Davies (bass) and Blake Davies (drums), the outfit are set for huge things coming off the back of a tour with Death From Above 1979.

Two Hands, starts as it means to go on. ‘Invisible Hands’ is a short and compact blast of energy with a perfectly apt blend of guitars and vocals, starting off slow before rocking you from side to side in a pulsating rhythmic assault.

We then roll straight into one of the lead singles, ‘Rabbit’s Foot’, which does not lose flow or tempo as it picks up where the alt-rockers left off in the intro track. Utilising White Stripes style bass melodies, it feels like being punched in the gut. At least ‘Rabbit’s Foot’ serves up a healthy dose of synth to make things better.

Track three comes around, and a change up is part of the menu. Unbeknown you start to feel as if Crystal Castles have snuck on to the record before that heavy hook and the harmonised chorus makes you stand back and scratch your head.

The album was co-produced by the producer of Royal Blood’s EP and debut. But, frankly, it embarrasses the work of the UK’s current rock poster boys. Turbowolf are serving up the main course of riffs and huge vocals making Royal Blood look small in comparison.

‘Nine Lives’, what looks to be the band’s radio friendly song, still plays a huge part on the LP. It showcases Turbowolf’s innate ability to dish up a pop-laden rock song but still not differ too much from the house style of the record. Having been showcased on Radio 1, Georgiadis said, “Nine Lives is a song about making the most of our limited time; about living with no regrets; about changing our attitudes towards death and about life. It’s a celebration of the known, unknown and everything in between.”

Themes on the track, match the time signatures of the songs as they blend together in one big melting pot of musical mayhem.

Turbowolf can also express that they have a mellow side and have done so in the past. I was lucky enough to witness them play on the DFA1979 tour and their ability to orchestrate a crowd of ageing fans was impeccable. This skill will become most apparent in the live set up with the track, ‘MK Ultra’.

This track reminds me of sitting around the camp fire when you’re young with the guitar, as you’re told a story in a musical form. This track, alone, should play as a beautiful intro to shows.

There seems to be a recurring theme on the LP though. Scrambling the listener’s brain, leaving them disorientated without much leave for a relapse. ‘Rich Gift’ opens with a synth-laden intro before bursting into a beautiful guitar symphony, changing up, with harmonies courtesy of the brilliant vocals of Lee Davies.

Taking the time to review this album has been a pleasure, and is genuinely shaping up to be one of my favourite records of 2015. Turbowolf, in the spirit of things, have pressed the first press on ‘Solid Gold’, housed in a beautiful gatefold sleeve, sure to excite the vinyl lover amongst you.