Home » News » People in Your Life » Review: Where We Are Tour 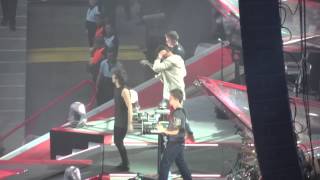 As I type this I have my poor, aching feet up and a new pair of PJ’s on as I reminisce over the past weekend which I spent in London. It was great fun but nothing can compare to the first day – Friday. One Direction’s world stadium tour hit Wembley this weekend and I was beyond lucky enough to witness the opening night at the world famous stadium which has a maximum capacity of 90,000 people.

Despite the concert not taking place until that evening, I was wide awake at 5am with lack of sleep due to my excitement. I was finally being reunited in the same place as all of my idols. After an interesting bus ride up to Hounslow – our temporary home for the weekend – we called a taxi to Wembley Stadium. You could tell someone as big as One Direction were there as we reached closer to our destination as traffic became horrendous. However, we managed to arrive with plenty of time to spare and the beginning of the best night ever began. I met my best friend, Nia, through our love of those five boys. She lives in North Wales and we found out we have mutual friends, so the past year we have become really close online and today was the day I finally met her. After our emotional meet, we headed inside and took our seats in the stadium.

It’s pretty emotional to see a bunch of small town boys win the hearts of the world, so when we saw just how many people were there to support them in Wembley it definitely got us feeling a little choked up.

Onto the concert now and 5 Seconds of Summer – AKA my other favourite band – were the opening act and have since taken the world by storm after supporting 1D last year. They have now been signed to Capitol Records, who The Beatles were signed to, and have an album coming out at the end of this month. As the four plucky Australians took to the stage, the thousands of people in the audience roared with excitement. Rocking out songs such as their new single ‘Don’t Stop’, unreleased songs such as ‘Amnesia’ and their cover of Katy Perry’s ‘Teenage Dream”’, crowds of teenage girls swooned and sang along to every song, enjoying every moment of their presence as the teens rocked the stadium with their rock/pop/punk songs. It was amazing to witness and to think this time two years ago, they were just four boys living in Sydney recording covers on YouTube before being discovered by One Direction themselves is completely surreal. I, for one, am an extremely proud fan.

After the Aussies had finished their set, we had an interval before the main act which consisted of over 70,000 people doing the Macarena in sync (with the security guards even joining in) and a series of Mexican waves. From the fans to parents and other people in the audience – everyone participated and it definitely got us pumped for the concert.

At last, it was time. The crowd were going wild as the intro video played and the boys burst out on stage with their song ‘Midnight Memories’. The boys were full of energy and bounced around the stage causing everyone to become more and more excited. The set list consisted of songs from the new album, Midnight Memories, with occasional songs from previous albums Take Me Home and Up All Night.

No two One Direction concerts are the same and this one consisted of Niall running off to go to the toilet so Liam told a bad joke, Harry Styles eating a banana right in front of a camera lens and a lot of messing around between band members.

Not many people would have paid much attention but the graphics on the screens during songs made the entire set look amazing with loads of 80’s retro graphics.

The whole concert just looked stunning. Not to mention the fireworks that put Bonfire Night to shame.

The entire concert was outstanding and I never wanted it to end. Every second of every minute was just perfect and I couldn’t have expected anything better.