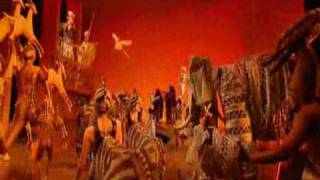 Before I truly get into my review of my recent experience watching the theatre version of The Lion King, I feel the need to let everyone know this was my first true theatre/Broadway experience… ever. So if I say something that may offend you veterans of the stage, then I truly am sorry. However, just take my opinion with a grain of salt (or however the expression goes) and let me say my thing.

So, yeah, The Lion King. If any of you remember from my previous review on seeing the animated version in 3D, you should know that I adore, The Lion King. I adore it so much I will be talking about a 40 second to a minute clip of it during a 5 minute presentation for my Contextual Studies module next week. I could talk about this film for days, so when I heard that the Broadway version would be making its way to the Wales Millennium Centre, I jumped at the chance to go see it told in a completely different way. Well, technically, I jumped at the chance to pester Wicid to get me tickets to go see it – which they somehow managed to do – but you get my point, and that being the people at Wicid are truly amazing people.

I went with my older brother because it’s been so long since he’s had a chance to have an evening with me since he’s a family man now and as I now live in Cardiff, I felt it was a good a time as any to have a brother-brother night with him, or however those family things work. Even still, I got there, I didn’t know what to expect since it was my first Broadway/musical/theatre experience, and all I can say is… it was magical.

Phenomenal. Outstanding. Breath-taking. Jaw-dropping. Heart-stopping. All of the greatest things I can say about this experience because that is what it was to me. I mean, I heard about the concepts involved in the show what with the use of puppetry to show the movements of the many creatures from the film, or just listening to a live performance of the sounds that came from the brilliant Hans Zimmer, Tim Rice and Elton John. But that was only from clips online or from the Diamond Edition Blu-Ray I’ve got (and constantly watch whenever I feel the need to have a Dominos Pizza). But seeing it live, words can’t truly explain how it felt to me.

I mean, you could see the similarities between the animated film and the live version, what with the famous quotes and lines from the film, as well as the songs and characters, but it felt so different. The fact that the performers weren’t hand-drawn lions, hyenas and other creatures from the film, it didn’t take away from the storytelling. I was more focused on the masks and puppetry of each character more so than the actual actors on the stage.

The moments during the show pulled at my emotions just like the film did, and still does. You know, that one death scene… gets me every time. The opening and ending sequences of ‘The Circle of Life’. ‘Remember Who You Are’, you know, all those moments, all those feels? Except this show did it in a different way, mainly with those puppets I keep mentioning, as well as the choreography of the dances during most of the songs as well.

An interesting fact to me came from the best character in the show, Rafiki. You know that old, wise and eccentric baboon from the film who is wise beyond her days… wait, her days? I thought Rafiki was a man monkey! That’s what you are saying right, that’s right, I can read your minds. Rafiki in this show and in all the other Broadway versions is actually depicted as a female, which in all honesty didn’t take away from the character. If anything, the way she was presented during the show honestly made me wonder what it would have been like if the Rafiki from the animated film was actually female instead of male. I mean, the one sad truth from the film I always wished was highlighted a little more was its lack of true interesting female characters. I mean, we only had 2 ones of real note, one of which being completely underrated but I’m going off track here.

This show had many great performances during the songs from the film which were all choreographed so well. And to add to this, as this version was longer than the film, it included songs and moments that didn’t make it into the film that I truly wish did. ‘Shadow Lands’? One of my favourites from the musical exclusive songs I heard here, but of course, both ‘They Live In You’ and ‘He Lives In You’ will always be my favourite songs from The Lion King as a whole, which is quite possibly why I like The Lion King 2: Simba’s Pride film as much as I do.

Of course you had your comedic moments involving Zazu, who didn’t want to go back to Scotland at one point (he was Scottish in this show which was… interesting), The Hyenas doing their usual silly things, Timon making a reference to Frozen at one point which admittedly got a chuckle out of me despite how I feel about that film (another article for another day perhaps?), and that infamous scene where the duo dress in drag and do… river-dancing? That, to me, was the best comedy moment from the entire show. I even have a massive grin on my face now as I type this, thinking back to that moment, it was one of those moments where you had to truly be there to enjoy something like that.

I adored the use of lighting throughout the show, particularly during ‘Be Prepared’ and constantly flashing while turning to a deep red colour when signalling the death moments of the show, giving a more serious tone but simple uses of colour. The stampede scene was just as impressive on stage as it was during the film. The way the stage props rotated along the stage during the songs and the general story moments was something great to see. Seeing the different creations emerge from the live audience during the opening was great, as well as the bird flying across the higher parts of the stage after the short intermission.

So, what is worth highlighting about this show? Everything! If anyone is ever on the fence about seeing the Broadway version of The Lion King because ‘oh well it’s not the same as the film because it’s people and not cartoons or actual creatures!’ I say, you’re right, it’s not the same, but that doesn’t make it a bad thing. In fact I’m not a Broadway/musical/theatre person in the least, but this one show made me want to see more shows of anything different in the future. Besides, it tells the story in a similar way to the film while adding scenes that I wish made it into the film, but couldn’t because… reasons.

But it’s so worth it! I cannot stress this enough. Next time they are in Wales, or if you are in any other part of the UK or anywhere else in the world where they will be performing, just go. You won’t regret it, I can assure you of that.

Info Things To Do The Arts Gigs, Concerts, Events And Festivals

Info Things To Do The Arts Acting, Drama And Theatre