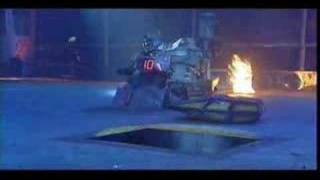 Teenagers transformed scrap into ‘robocars’ then wrote a rap about their amazing creations, in a project run through Rhondda Cynon Taf Libraries.

More than 80 teenage boys met at Valleys Kids’ base in Penygraig to race the model vehicles constructed out of scrap materials.

The event was the culmination of a literacy project funded by Basic Skills Cymru, in which the boys researched cars and robots in their school library, then designed and made the models during workshops led by Swansea-based science education company, XLWales.

Once the models had been constructed, the boys worked with rapper Jon Chase and musician Geraint Brown to write rap songs describing their creations.

This was the latest project in the Read A Million Words Together In Wales initiative aimed at encouraging teenage boys to read and was organised by RCT Libraries in partnership with the authority’s Education Department.

The Robocar Challenge was won by The Killer, built by Connor and Rhys from Blaengwawr Comprehensive School, Aberaman.

Rhondda Cynon Taf Council’s Cabinet Member for Culture and Recreation Cllr Robert Bevan said: “Our Libraries Service offers a range of opportunities for people of all ages to be creative throughout the year and I’m pleased this youth project was such a hit!”

Membership of all Rhondda Cynon Taf’s libraries is free and everyone living or working within the county borough is welcome to join. Find out more by visiting www.rhondda-cynon-taff.gov.uk/libraries.