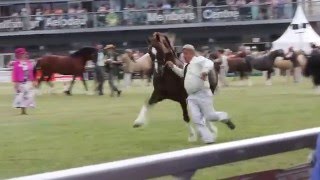 In the first week of the summer holidays, a few WICID members attended the 50th Royal Welsh Show held on the Builth Wells Showground in Mid Wales.

The Royal Welsh Show (Sioe Frenhinol Cymru in Welsh) is the biggest agricultural event in Europe. It is organised by the Royal Welsh Agricultural Society and takes place in July of each year, at Llanelwedd, near Builth Wells in Powys, Mid Wales. The show lasts for four days and attracts more than 200,000 visitors annually, making it a major point of tourism in Wales.

We set off from Pontypridd bus station at 7:30am for what was going to be a fun but long journey to the hills of Mid Wales. We hit the A470, and halfway there we stopped at a McDonald’s for a cup of tea and some breakfast to wake us up. We then headed over the Brecon Beacons, and were greeted with a spectacular view of the sun shining through the hills of Brecon.

At 10am we were all wide awake, and had just arrived on the outskirts of Builth Wells. We chose to attend the show on the Wednesday, which is both “cob day” and the busiest day of the week. A visit from the Prince of Wales, Prince Charles and the Duchess of Cambridge, Camilla made the day busier still. Given its “Royal” status, it is not unusual for a senior member of the British Royal family to attend. As a keen supporter of the farming community, the Prince of Wales is often a familiar sight.

So, we were stuck on the country lanes of Mid Wales, queuing up for parking for over an hour and a half, but finally we parked the car and took a trek to the shuttle bus which took us to the showground. We got to the ground at 11:45, before queuing for another 10 minutes to purchase tickets.

Finally, after a long time queuing, we set foot onto the showground. The ground was so busy that we were stood shoulder-to-shoulder. We set off to walk around the grounds. There were a range of things on show from the entrance to the grounds, with a load of farm machinery, horse shops and more farm related items.

We then took a walk over to one of the show rings and watched the horse trekking competition, with a load of Shetland ponies owned by little boys and girls competing for the 1st, 2nd and 3rd prizes. After watching that display it was 28 degrees so we decided to head on over to the grass bank and relax with a nice ice-cream and watch the well-known Portuguese School of Equestrian Art at main-ring while the sun was shining.

It was now time for something non-animal related – a stunt show by the Australian Kangaroo Kids. They showed off some marvellous skills and stunt rolls on quads, including jumping over a tractor, two vans and a jeep together, which totalled to 25m in length.

We then watched the final horses before we set home. These were the Welsh cobs and they were brilliant.

It was now 6.30pm and we left the showground to board our shuttle bus back to the car. When we got off the shuttle bus we spent 10mins looking for the car but then we finally found it hiding behind a massive jeep (naughty car!).

We then hit the A470 at 7 and headed once again to McDonald’s for a little snack before heading home to the Valleys.

We all arrived home at 9.30pm. We were all shattered and worn out, but it was a fun day and I would like to go next year as I thoroughly enjoyed my first ever Royal Welsh Show.

The show once again broke their attendance record this year, with over 241,781 people attending during the week.