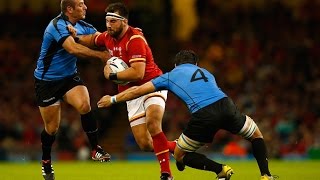 With the Rugby World Cup 2015 in full swing, I’m going to be keeping you up to date with my articles right here on Wicid, and on my Twitter page! I’ll be sending tweets on the breaking news coming from the tournament and the Welsh squad, so stay tuned.

Well, what about that fantastic Welsh victory over Uruguay (Sunday September 20th). However, as a result, the Welsh squad have suffered a lot of injuries. But, let’s just hope some of them can get better in time for that all important game against England on Saturday 26th September 2015.

So who were the stars of the Wales game against Uruguay?

* Corey Allen – He scored a hat-trick for Wales! What an incredible performance by Allen. However, due to a hamstring tear, Allen will be out of the rest of the tournament which is a huge blow for the Welsh squad.

* Hallam Amos – He scored one try for Wales against Uruguay, he’s a fresh face so let’s hope he can keep performing like he did.

*Justin Tipuric – An incredible player against Uruguay, making all those tries possible.

Meanwhile, captain Sam Warburton admitted Wales have “a lot to improve on” ahead of their next Rugby World Cup game against England next Saturday.

The flanker said he was pleased Wales had succeeded in their main aim, securing a bonus point in victory over Uruguay.

Outside the stadium, and frustration grew as trains were packed and delayed as they couldn’t keep up with the amount of people packing onto the stations all around the capital; the amount of fans were ‘underestimated’ by Arriva Trains Wales and First Great Western Trains.

Couldn’t have escaped your notice?

A massive World Cup rugby ball smashed into Cardiff’s most famous landmark. The historic Cardiff Castle had a rugby ball sticking out of one of its walls. It went viral in just under an hour with thousands of people taking photos and sharing them on social media.

Away from Wales and there was of course that unforgettable opening ceremony at Twickenham, England. Amongst the crowd was Prince Harry, Prince William and Princess Kate.

Also keep up to date on the Wicid Twitter page: https://twitter.com/wicid

That’s it from me, I’ll see you soon, goodbye.

Info > Things To Do > Sports And Keeping Fit > Rugby