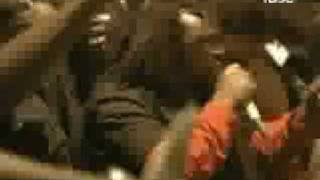 On Monday 10th December 2012, I attended The Factory, in Porth, to watch Newport’s best band Skindred.

Skindred are a band of five people from the city of Newport in South Wales, who play a mixture of rock, reggae and metal music. They have performed at the Download Festival 2011 and 2012, which is a rock weekend held in the UK. Download Festival is held in Donington Park, Derby.

Skindred chose Porth as their first UK tour date of 2012. The tickets sold out in the first 3 weeks, but The Factory put extra 30 tickets on sale on the night of the gig and they all sold out in a matter of 20 minutes.

People started lining up outside the venue as early as 4.30pm to get the best view of Skindred.

The first support band was Instill from Wales. They were a heavy metal and rock genre of music and got the crowd warmed up for Skindred. They started their set with an original song called ‘Guestlist’, which I really enjoyed listening to, as they performed it really well. The next song they performed was a cover of the song ‘Riverside’; I was not impressed with their cover of Riverside as they changed the majority of the words. To finish their set they closed with their newest song of their new album ‘Captain Pedalow’.

The second support band, from the City of London, was called Zico Chain. Zico Chain formed in 2005 by a group of mates – Chris Glithero (vocals and bass), Paul Frost (guitar and vocals), Ollie Middleton (drums), and Tommy Gentry (guitar).

Then they released their first album called ‘Food’ in 2007. Zico Chain opened the main stage at the Download Festival on 8 June 2007. Zico Chain has supported ‘Velvet Revolver’ on their 2007 summer tour of the UK, in support of their second album ‘Libertad’. They recently released a second album “The Devil in Your Heart” back in April 2012. The first song they performed was a cover of ‘Sex is on Fire’ by Kings of Leon, I really enjoyed their rendition of Kings of Leon, as that is my favorite song. They performed their latest original song called ‘New Romantic’ which I thought was well-written and the lyrics were awesome! They finished their set with their first ever-original song called ‘Where Would You Rather Be?’

After Zico Chain, there was a 20-minute break. While Skindred’s stage crew were setting up all their equipment, The Factory sound technicians got us in the Christmas spirit by playing a load of well known Christmas songs such as, Shakin Stevens – Merry Christmas Everyone, Band Aid – Do They Know its Christmas and a lot more festive songs.

After the 20-minute wait was over, it was time for the one and only Skindred! They entered on stage with their theme tune for their stage entrance, which was Star Wars! All the band members came on first and then the lights went down and out of nowhere appeared the band’s vocalist, the one and only Benji Webbe, (did you know that Benji’s real name is Clive?) They started off with the song called ‘Electric Avenue’. I really enjoyed this song as Benji got the crowd jumping and sweat was pouring everywhere (especially at the front). The next song they performed was one of their older songs called ‘Tears’; as soon as the song kicked in all the crowd split and made a massive circle in the middle of the venue and people just started moshpitting. However, one fan decided it would be funny to run in to a pole while in the moshpit. They then played a number of songs such as ‘Run Dem’, ‘Selector’, ‘Set It Off’, ‘Sicker’, ‘Spit out the Poison’, ‘Stand for Something’ and ‘Start First’.

I really enjoyed my first Skindred gig and cannot wait until the next time they are touring in Wales!