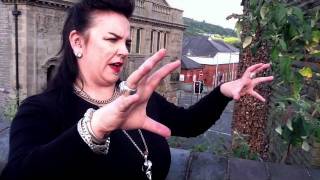 On Tuesday 28th June at the Muni Arts Centre, Pontypridd, Sonig celebrated their 11 year anniversary. Sonig is part of the Arts Development Unit in the Rhondda Cynon Taff and supports young people aged 8 to 25 in the music industry which offers lots of different opportunities. Liam, Owen and I got the chance to attend this anniversary to review and honestly, I really enjoyed myself.

The night began with speeches from people such as Strinda Davies – head of Cultural Services, Tanya Walker Brown – SONIG, Spike Griffiths – SONIG, Adam Bowden – Youth accreditation service, Julie Weir who is a director of the record company “Visible Noise”, we had the chance to interview (and Julie wanted to interview me, too, which I was a bit shocked at!) which was then followed by an acoustic performance by local band, Ladies Love a Superhero. I’ve seen this band perform a few times now and I thought that they were great as per usual. After the performance, we went outside to interview both Julie and Tanya about their careers, which you can see in the video.

Both ladies were really friendly and were interesting to talk to, we had a great time.  The boys and myself think the whole idea of Sonig is an excellent way to get young people involved in the music industry and we wish the best of luck to Sonig for future projects.