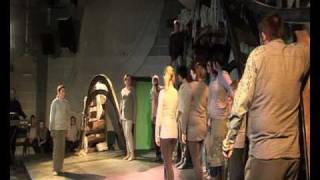 On the 31st October, 1st and 2nd November 2012, I took part in Spectacle Theatre‘s Script in Hand Workshop at Coleg Morgannwg, Llwynypia Campus.

I was joined by several young people from Communities First in Rhydyfelin and one person who is studying Performing Arts at the college.

On the first day we all met for an introduction to the course at the Rehearsal Room in the college campus where we met Carys and Steve from Spectacle.

To start the day and to wake us all up (as it was 9.30am) Carys played a game called DUCK BANG!! The rules of the game were to DUCK if someone else pointed at you and then the people either side of would have to shout BANG!! to each other while making a gun shape with their hands and the first one to say BANG would win and make the other person lose a life.

After the first game we got into pairs and came up with a 3 minute sketch on anything we like. I worked with one of the boys, Josh, and we did a sketch on bullying and we both enjoyed performing in front of people we didn’t know.

We had a 15 minute break to regain our energy ready for the next activity. After our break we started playing the game Fruit Salad. In this game someone would be in the middle and would shout out something like ‘People who have blonde hair’ then all people with blonde hair would get up and run to find a seat which was empty and if someone hadn’t got a seat they would have to shout out something to get their seat back.

After that game we had our lunch in Cafe Cwtch which is the Cafe for the college. We had an hour lunch break and we got to know the other young people on the workshop.

After lunch we went back to the Rehearsal Room and did some trust skills where one of the smallest boys had to jump off a step ladder and land onto our arms.

I really enjoyed the first day of the workshop and I met a lot of new people.

On the second day we all met in Spectacle’s office before heading on over to the Rehearsal Room.

Over the Rehearsal Room we played the game Fruit Salad again to wake us up again.

We worked on the performance all the way until lunch. On our lunch break we had a game of hide and seek as it was a nice day to go outside.

After lunch we finished our rehearsal of the performance which took us through to the end of the day.

I enjoyed day two as we did more acting and technical things than we did on day one.

On the final day we started a dress rehearsal of our performance before filming it after lunch and I came up with red, blue and green lights for the performance.

After we rehearsed the performance we played the DUCK BANG!! game for the last 10 minutes before we went for lunch.

After lunch we performed to some of the college staff members and they really enjoyed the performance.

The video attached is of a Spectacle Theatre performance, for you to see what the performances are like.