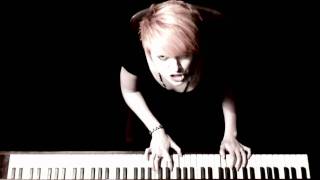 Birdeatsbaby, an orchestral punk-rock quartet from Brighton, are currently trying to raise £10,000 on Kickstarter to fund their next album.

As an underground band without the support of a record label, the indie band need their fans to help them meet their target which will enable them to release their greatest, darkest album to date. Kickstarter rewards include CDs, T-shirts, limited edition artwork and even the opportunity to perform with the band and hang out at The Nest, Birdeatsbaby’s HQ.

The band’s mix of cabaret, punk, rock and classical combine to create a sound which is completely uniqueâ€¦and extremely hard to define. Lead singer Mishkin Fitzgerald has an astounding vocal range that adapts for every song – from quiet, piano-led songs to cabaret-punk anthems and even heavier goth-rock songs (see Sugarknife on her latest solo album).

Perfect Company, Mishkin’s solo album, was recently spotlighted by the Guardian and the band have also received high praise from the Independent, The Quietus and the BBC6 music blog Fresh on the Net.

Taking cues from a diverse range of artists including Nick Cave and Muse, Birdeatsbaby have also been compared to the Dresden Dolls, a Boston-based band currently on hiatus as frontwoman Amanda Palmer continues her solo career.

As the undisputed queen of Kickstarter, Amanda Palmer smashed records when she launched her latest venture last year. Initially aiming for $100,000, the project to fund a new album and tour ended up with well over a million dollars.

Kickstarter and similar crowdfunding sites are signalling the dawn of a new age of fan-led media. Independent artists are relying on their fans to support them, harking back to the days where cultural endeavours needed patrons to step in.

This new way of funding means that independent artists have a greater freedom over their art, without the limits often set in place by record labels, as well as allowing fans to feel more connected to the artist.

Birdeatsbaby are perfectly imperfect. They’re not corporate pop. They’re tough, loud, refreshingly honest, and definitely one of the best bands around today. Support indie art and be a part of the media revolution by supporting their Kickstarter, or if you’re not able to, help them out by spreading the word to family, friends and on social networks.

Related Article: Are The Pitchforks The New Band In Town?