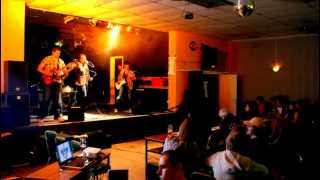 With a debut EP coming up, a victory in the ‘RAW Battle of the Bands 2012’ and several gigs, now is an exciting time for Kieran, Tom, Liam, Ethan and Iwan, otherwise known as Supporters Not Criminals. Supporters Not Criminals first came together in a music based project called ‘Rock Academy Wales‘, where – over the course of a week – budding young artists are coupled together and put on a gig at the end of the week-long course.

A diverse setlist, which includes covers from bands such as Blur to The Darkness, with a few original singles placed in for good measure; energetic performances along with witty banter with the audience has helped them to gain a good following.

“Some of our inspirations as a band are the rock and roll heavyweights like Foo Fighters, Red Hot Chilli Peppers and Rush,” lead vocalist Kieran says, who is also part of the super-choir Only Boys Aloud, who came 3rd in the talent show Britain’s Got Talent and have recently signed a major record deal. Kieran also described his stage antics as being inspired by several rock vocalists from the 70’s and 80’s.

In regard to the future, the band stated that they “hope to gig as much as we can can and become a recognised band and hopefully get some recording time”. One thing is for certain, Supporters Not Criminals are a band to keep your eye on.

You can check them out via their Facebook page: www.facebook.com/sncrock