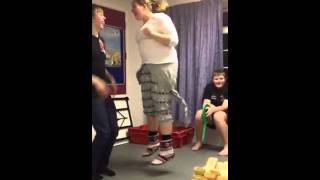 Valentines day is normally the day where couples get loved up, secret admirers send their crush a card and single people usually complain (I hear you out there, peeps). But that’s not how the ‘Wicidites’ do it. No, they head off in two mini buses out to Port Enyon, in The Gower to spend 3 days working on OCNs residential.

8am was the meeting time for the Rhondda mini bus at Porth Depot. I was full of a cold, tired and in need of my bed, but I wasn’t going to chicken out. I was going even if it killed me (and with Matthew and Lewis breaking wind all the time, trust me, I almost did die). Josie had brought four bags. You’d swear she was going for a month. She was doing the Film Making OCN and when they said “bring dressing up clothes”, she brought all of hers. Though, I do respect her for having an Elvis Jumpsuit.

The bus ride was pretty boring. Nothing major happened, really. I kept dozing off, the boys kept “letting them rip” and that’s about it. When we arrived at Borfa House, the destination for the next two nights, we went inside and waited for the other mini bus. Some people played Ping pong, whereas I just flopped out on the sofa and counted the minutes down to my next lot of flu capsules. When the other bus arrived, we all said hello and introduced ourselves before going off to our OCN groups.

There were two choices of OCNs; Photography (With PLUGGED IN Editor and photographer, Darren) and Film Making (with Wicid Editor, Craig). I did the Photography Course along with a few others. We learnt different things such as the Rule of Thirds, where imaginary lines are drawn dividing the image into thirds both horizontally and vertically and you place important elements of your composition where these lines intersect. After filling out booklets, it was lunch- Chips and (veggie for me) burgers. We were pretty hungry by then, so I think it’s safe to say that we enjoyed the meal.

After food, the photography group went to the beach to take photos. My God, it was freezing. I wish I took a warmer coat, I can tell you that now. I stuck with Martyn and Connor and went around taking landscape photos. It was pretty fun, but it was so cold, I was willing to do anything to keep warm. We did manage to get quite a few photos, though. I think by the end of the first day I had about 300 and by the end of the residential, I had over 1,150.

About five-ish, we went back to the house for tea, which was a buffet. The only veggie thing I liked were the pizza fingers, so I just loaded up on them. We then had free time. That included a very intense game of Mega Jenga (I think Craig is now obsessed with that game) and charades. Oh, and Martyn, Connor and I looking for “Annie” (We were listening to the Alien Ant Farm’s version of Smooth Criminal and we were a little hyper you had to be there to find it funny) When we were told that we could go on the computers, I was beyond happy. Until there was no YouTube and I realized how slow the computers were. So painful. Oh well, I suppose I needed a break from the internet Ha. Yeah, right. We also got quite peckish at about 11pm at night, so we made cheese on toast. They were lush, except we were told off for using their cheese. Friendly advice to people who own residential houses- Don’t mix your food in the guest’s fridge “We will eat your cheese”. We were made to go to our rooms about 12-ish. I think I got about 3 hours sleep. I kept hanging off the bed. Downgrading from a double bed to a child’s single bed (the house is usually for primary schools) is horrific. I spent half the night playing Angry Birds, Tap Tap Revenge 3 and Temple Run.

Our wake up call was about 8am ready for breakfast at 8:15. One of the bathrooms were being done out, meaning 8 girls had to share a tiny bathroom. So Josie and I thought “Forget that, we’ll go down in our PJ’s and get dressed later.” So we did. Breakfast wasn’t amazing. I only had toast and squash, but I didn’t mind. We went and got dressed before going out to take photos in the village. We had to go in pairs. I was with Martyn and we took photos of just about everything. I took one or two photos that I was quite pleased with. We sneaked off to the chippy before heading back to the house. I decided to skip lunch since it was only sandwiches and I just had some really nice chips, so I have no clue what lunch was like.

The afternoon consisted of more form filling, printing photos, etc…then some team games such as Jenga, a quiz, ping pong and a music quiz. Ashley and I did the scores and ran the music quiz, which was fun. We then had more free time where Craig taught me ping pong (which I now love, despite being awful at it) looking for “Annie” again, and watching a little bit of Epic Movie on Ashley’s laptop. Connor, Martyn and I played some snap and Go Fish before heading off to bed. We had another long day ahead of us.

The final day, we got up and dressed, had a cooked breakfast (Spaghetti Hoops and toast for me) then got ready for our activities. We were doing outdoor activities including map reading (finding triangles), building huts and climbing trees. I took photos instead. Not much of the outdoor type, but boy was it fun watching the others. At lunch, we had rolls, muffins and fruit. Lewis showed us how to properly open a banana. “You snap the top then stroke it.” We were practically wetting ourselves at that and started playing the game where you replace a word with banana. We had things such as “The Chronicles of Banana”, “Star Wars, the revenge of the banana”, “Charlie and the Banana factory” and so on (if you have any better ones, please comment, we’d have fun reading them). After a long day of activities, we headed to the chippy one more time before saying our goodbyes and departing from Borfa House.
It was a pretty fun residential but I’m gutted I was full of a cold (sorry if you caught it, by the way) because I probably would have enjoyed it all.

2 thoughts on “The 3rd Wicid Residential”