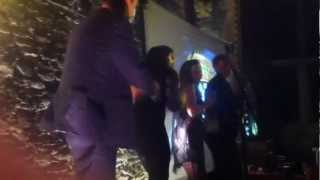 This article is pending translation.

So, Tuesday 30th October 2012 saw the magnificent yet spooky CLICawards! This was the second annual awards ceremony that has been held in honour of us fantastic CLICers and let’s just say, it was bloody amazing!

The ceremony was set in The Grand Hall in Caerphilly Castle and looked like something out of Harry Potter due to the way it was set up. It looked amazing and you couldn’t have picked a better place to hold the creepy themed event. On arrival, we were greeted with Halloween themed music such as Michael Jackson’s Thriller and the ever-popular Ghostbusters! That alone, was enough to get you in the mood for a great night!

After everyone said hello to one another and had some of the buffet, it was time to be seated for the ceremony to begin. We were first entertained by Adele from Blaenau Gwent who came second in the CLICstar competition. She played a melody of different songs such as Harry Potter and so many other creepy themed tunes.

After Adele received her award from CLIC’s National Editor, Ryan, for coming second in CLICstar, the awards began. With different awards given out to different CLICers, we soon were entertained by TWSkittles who won the CLICstar competition and used her fantastic vocal skills to sing to us for our entertainment. She’s a really good singer and she must have had guts to stand in front of everyone.

Soon after, there were more awards. I won Super Commenter of the year. Guess what I did? Yep, I fell onto the stage and almost onto the Mayor of Caerphilly. You see, the stairs were pretty small and my stupid shoes which I ordered from eBay to go with my Minnie Mouse outfit were flimsy and caught onto the very small steps which led to the stage, thus leading to my not-so-graceful fall. Of course, I was so embarrassed, but I wasn’t going to let it look that way, so I hugged the mayor and took my award before saying into the mic “Well, what an entrance!” To be honest, it was expected of me to fall. I’m a klutz and on my first ever CLIC Weekender, I was bandaged up after another accident I had just the day before.

Anyway, my clumsiness aside. Miss Snow.. was crowned CLICer of the Year 2012 and I was so proud! It was amazing for someone who is so dedicated and has a passion for CLIC to win the title and being the winner last year, it was an honour to pass my title down to someone who is such a true friend to me. She totally deserved it and I’m so so so so proud of her! I was made to make a speech last year, so it was only fair that I got her to make one this year! But, not only that, she got Keith Towler, the Children’s Commissioner of Wales, on stage to dance the Banana Dance with her! We were all in stitches!

With the awards over, the CLIC Battle of the Bands winners, Tone Damage, performed to close the night and we all dance the night away as well as mingled and saw friends from all over the country.

The CLIC awards were fantastic and overall, it was a brilliant night. If you get the opportunity to go next year, chase after that opportunity and take it because it’s guaranteed you’ll have a fantastic night full of entertainment and amazement.

*Cue cheesy Oscars-like speech* I’d like to thank everyone who nominated me for seven awards (it was an honour to be nominated) and to everyone who voted me! I’m now Super Commenter, second CLICer of the Year and third Most Involved, which I’m chuffed at! I’d also like to thank the amazing CLIC staff for putting on another fabulous event and a massive thank you to all the friends I have made!

See all the CLICawards 2012 results here.