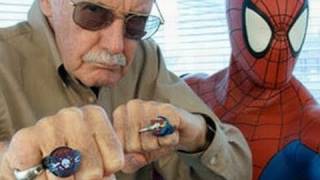 Stan Lee has 100s of children if not 1000s, but unlike mist men his children come from his… (it’s not what you think) …brain! For those of you who don’t know who Stan Lee is? He is the creator of some of the greatest superheroes in history! His brain-children include:

Stan Lee made his first superhero “The Destroyer” 70 years ago, way back in 1941. Stan does not to shy away from the silver screen, he has made a cameo in 15 Marvel films with 2 more scheduled for next year. And also appears in many TV shows and video games.

Some famous quotes are:

I try not to do anything that’s too close to what I’ve done before. And the nice thing is we have a big universe here. It’s filled with new ideas. All you have to do is grab them.

With great power there must also come … great responsibility!