Home » News » Things To Do » The New Hannah Montana? 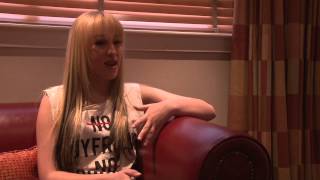 Yes, it’s pretty clear that the One Direction infection has spread all across the globe. It’s also pretty clear that a big percentage of the female population would do anything to be metres away from the boys, right?

American teen, Camryn – from Denver, Colorado, in America – is one of the support acts for the British heartthrobs and lucky old me had the privilege to meet the popstar at the Marriot Hotel in Cardiff before getting the chance to see her live along with One Direction on Friday, 1st March – therefore making it the best St David’s Day ever.

Later that evening, Camryn performed for over a thousand people in the Motorpoint Arena in Cardiff and she absolutely rocked it. As she bounced about the stage with bundles of energy, my thoughts couldn’t help but trace back to Miley Cyrus’ alter ego, Hannah Montana, at the age of thirteen when she, too, was the new kid on the block.

Camryn was definitely a crowd-pleaser despite not many people being aware of her songs as of yet but I have a gut feeling that after her amazing performance, she will be gaining fans overnight. Fans especially enjoyed singing along to songs that Camryn covered including Kelly Clarkson’s What Doesn’t Kill You.

Despite Camryn’s performance being short, I highly enjoyed every minute of it and was on my feet dancing and singing along to all of her songs. I guess it really pays off to have heard of her before One Direction because I was one of the few who practically knew her songs word-for-word, therefore making it so much more enjoyable.

I cannot wait for the day that Camryn headlines her own tour and I hope to God she will come back to Cardiff and rock out some more because she absolutely killed it out there and her energy is so infectious and leaves you on an all-time high ready for the main act.

Thank you so much to Camryn for helping me set up the interview, CLIC for getting in touch with Camryn’s publicist to arrange the interview and tickets and Wicid for taking me to interview Camryn. It was an amazing day that I’ll never forget and I am so thankful for!