Home » News » People in Your Life » The Paris Attacks: A Special Report 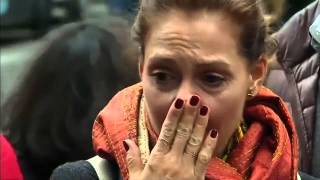 Paris is a city once again this year gripped by terror. But the scale of these attacks were far greater than the ones back in January. Six terror attacks were carried out on a normal, Friday night in the French Capital, which claimed the lives of 132 people and the death toll is expected to rise this week. More than 350 people are seriously injured in hospitals across Paris, and 99 people are in a critical condition.

Here’s how the night of horror unfolded, as reported:

@9.20pm (British local time) – Suicide bombers attempted to blow up a football match at the Stade de France where President Francois Hollande was present. He was quickly evacuated to safety. The bomber and a passer-by both died as a result of the explosion.

@9.25pm – Attacks on restaurants and cafés begin. Five miles away from the Stade de France, at the crossroads of Rue Bichat and Rue Alibert, gunmen start shooting people sitting on the terraces of the “Le Carillon” bar and the “P?tit Cambodge” restaurant, killing 15 and severely injuring 10.

@9.30pm – A second suicide bomber blows himself up outside the Stage de France killing himself. People sitting in the crowd suddenly spilled onto the football field after the explosions could be heard inside the stadium.

@9.36pm – Gunmen open fire on a restaurant terrace. 19 people were killed and nine were severely injured.

@9.40pm – Suicide bomber kills himself inside a restaurant injuring two other people.

@9.40pm – At the Bataclan Concert Hall where the most deadliest attack took place the attackers fired at the crowd. They then took hostages. As a result 89 people were killed and many were wounded.

@00.20am – Police and security forces launch an assault on the Bataclan concert hall.

As the news was breaking the French President held an emergency meeting with his Interior Minister. France has called the Friday night atrocity: “an act of war”.
France has now closed its borders as it has emerged that one of the attackers was registered not long ago as a refugee. This has now sparked questions that ripple at home in Wales – how can we stop terrorists from coming in with refugees? Nobody seems to know.

Britain remains on high terror alert meaning an attack is highly likely. For the second time this year candles were lit in Paris as a mark of respect for those who didn’t survive.

Several Kalashnikovs have been found in an abandoned car which is believed to have been used by some of the Paris attackers. And it has also been confirmed that three brothers were involved in the attacks on Friday night.

Landmarks across the world have been lit up in the colours Red, White and Blue the national colours of the French flag. Among them was the Senedd in Cardiff Bay, the home of Welsh Government.

I am very sad to be reporting on attacks in the French capital for a second time this year. The year has ended as it started for Paris. A horrific year for a country that is determined to fight on but there’s no doubt Paris is a city that has been changed for ever.

My prayers and sincere condolences are with the victims of these attacks.