Home » News » People in Your Life » To Craig, Thank You And Goodbye 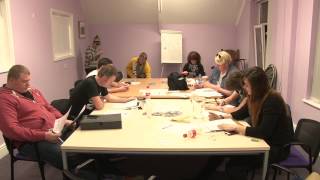 Craig Chapman has been a part of WICID.tv since the very early days. He helped to start WICID up and has been there at almost every workshop, conference, editorial meeting and event that WICID has been involved in. He has been a crucial part in the project for the last two and a half years and I don’t think it would have survived without him.

He has been there for and supported every young person as much as he can and will go out of his way to make sure they are okay, no matter what it takes. He often puts the needs of the young people in his care before his own and we all love him for it. He has provided opportunities for the young people of WICID since day one and still continues to do so today.

â€¢ Got an interview with Gino D’Acampo for several of the editorial.

â€¢ Getting free tickets for the editorial to places such as the Gadget Show Live, Ponty’s Big Weekend, Merthyr Rocks and so much more.

â€¢ Supports young peoples’ projects such as Inspire, Peter Elliott: The Movie and Battle of the Bands.

â€¢ Started up WICID radio shows, and trained editorial members to present them.

â€¢ And most importantly, got us into WICID in the first place.

People who know and work with Craig will miss him sorely when he leaves.

“Craig is such a great laugh and good at listening to our problems and he’s a great person and a kind person. We’re all going to miss you Craig, all the best.” –welshboy199

“He’s an awesome guy, with a totally crazy personality! Always looking slick and stylish, great fun to be with and completely bonkers! Unbelievably welcoming and friendly, he’s overall a fab friend.” –SynysterKatie

“I first met Craig the day we went to Anglesey on my first ever CLIC residential. I was absolutely freaking out because I was so nervous and I literally only knew two people and I was the only girl, but Craig was such a kind and friendly person and made me feel so welcome, I felt that by the time the residential was over, that I’d known him for ages! He’s a really enthusiastic and outgoing person and we’ve made some awesome memories, from interviewing people such as Gino D’Acampo, to the residentials and events like the Big Welsh Bite. It’s all been so fun to do and I’m really going to miss him. Thanks so much, Craig, for all the memories and best of luck with everything you do and don’t forget us because we’ll never forget you!” – Ihavethecyrusvirusx

“There are no words to describe him really. He is the best editor we’ve ever had. He’s helped me through everything, and he’s a brilliant lad! I can tell him anything, he’s like a father or a big brother to me. I’ll miss him when he goes, that’s for sure!” – Josie<3

“He’s such a lovely man with a big heart. He’s willing to help anyone who needs it, including myself. I’ve been bullied almost all of my life in school, and he has helped me – even helped me to stop self-harming. He’s always a phone call away and is a voice that can advise and listen to any problems you may have. It’s sad to see him go, and the thought brings me to tears.” – livvyjayne96

“From helping me technology wise to directing wise, writing to finding the name of the veggie sausages on a resi, Craig has helped me so much and I’m very grateful for it. After becoming part of the editorial team, Craig has made the experience a whole lot fun and educational at the same time. What some teachers aim to do but fail so much at doing. Directing the trailer of Peter Elliott: the movie was a great experience and Craig made every moment a memorable one. He’s been there to help me with my photography too and got me into events, which I would never have been able to do if it wasn’t for him. I’m truly sorry to hear you go Craig and I will miss you loads when you’ve gone, but all the best my big, veggie brother. And remember, veggie powers rule!” – Peter Elliott

“I can’t believe Craig’s leaving us! He’s such an awesome and down to earth guy and I’m really gutted he’s leaving. He got me and another 3 guys into WICID through radio and although that hasn’t really worked out, but we’ve had so much fun doing it with the quiz missing so many days because of snow and driving up to Treherbert blasting Bicycle from the car and all the other things like the Resi’s and fun days etc. Going to miss him. Not going to be the same without him!” –F1manicRBR

“Even though I have only known Craig for a number of months and I have thoroughly enjoyed working with Craig at a number of events especially the Battle of the Bands. I have learnt lots of filming and photography skills with Craig over the last few months while I have been on placement with Wicid.tv I am going to miss Craig a lot, I don’t know what I would have been doing with my life now if I hadn’t met Craig! Thanks Craig! You have helped me a lot lately and I am really gonna miss you!” – pandy12

“Craig has believed in and really pushed WICID since the beginning, and its huge popularity now is testament to his good work. It’s sorry to see him go and everyone will miss his creativity and enthusiasm.” Ryan Heeger – CLIC National Editor

“Craig’s passion for the people he works with and enthusiasm he shows to their work is really inspiring. He took WICID over at a tumultuous time, and made it work! No doubt that WICID.tv won’t be the same without him, but his talent will take him anywhere he wants to go.” Martyn David – WICID.tv Sub-Editor

A small note from myself: Thank you, Craig, for everything that you have done for not only me, but everyone else in the editorial, everyone in any project that you have helped with, or worked on. You have helped boost my confidence so much since I have joined WICID, and I have become a better person for it. We very nearly got 10,000 views on one interview, and I’m sure we’ll get there. I will carry on with interviews even after you’ve gone, as you’d probably shoot me if I didn’t. Thank you so much. I’m not sure how I’ll cope in interviews without the laughs and jokes we have, and generally taking the mickey out of each other. I’m glad that you got me to join WICID, and the reciprocations of it will remain with me for a lifetime. It was our pleasure as an editorial to have had the honour of working with you, whether it has been a long time, or just a few weeks. The pleasure is ours and we wish you all the best in the future, and don’t forget us! We certainly won’t forget you! In addition, you will also be missed by all of the staff in Services for Young People, all the CLIC regional sites, and PROMO CYMRU. Thank you and goodbye! 🙂

[Special thanks to Ihavethecyrusvirusx for permission to use photos]

4 thoughts on “To Craig, Thank You And Goodbye”