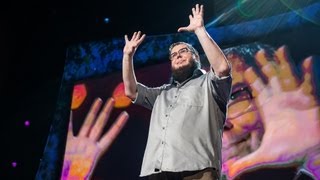 ‘To This Day’ is a poem about bullying wrote by Canadian poet and writer, Shane Koyczan.

Shane Koyczan was born in Yellowknife in the Northwest Territories. He grew up in Penticton, British Columbia.

In 2000, he became the first Canadian to win the Individual Championship title at the National Poetry Slam. Together with Mighty Mike McGee and C. R. Avery, he is the co-founder of spoken word, ‘talk rock’ trio, Tons of Fun University.

In August 2007, Shane Koyczan and his work was the subject of an episode of the television documentary series Heart of a Poet, which was produced by Canadian filmmaker Maureen Judge for broadcaster Bravo.

Koyczan has published three books, a poetry collection called ‘Visiting Hours’, ‘Stickboy’ – which is a novel in verse, and ‘Our Deathbeds will be Thirsty’ which is his most recent work, published in 2012. ‘Visiting Hours’ was selected by both the Guardian and The Globe and Mail for their 2005 Best Books of the Year lists.

He also is a musician who performs songs based on his poems and films.

This following poem is one of his recent poems based on the topic of bullying.

‘To This Day‘, by Shane Koyczan.

When I was a kid,
I used to think that pork chops and karate chops
Were the same thing.
I thought they were both pork chops,
And because my grandmother thought it was cute
And because they were my favorite,
She let me keep doing it

Not really a big deal. . .
One day,
Before I realized fat kids are not designed to climb trees,
I fell out of a tree
And bruised the right side of my body

A few days later the gym teacher noticed the bruise
And I got sent to the principal’s office.
From there I was sent to another small room
With a really nice lady
Who asked me all kinds of questions
About my life at home

I saw no reason to lie,
As far as I was concerned
Life was pretty good
I told her, “Whenever I’m sad
My grandmother gives me karate chops!”

Shane Koyczan has wrote a number of poems on all kinds of topics which you can find on his website along with other pieces of his work.

Please take a look at all of Shane’s work as you will find a lot of information and influences if you like creative writing and writing poems and short stories.

Related Article: Year 9 Of Porth County Community School Give Us Their Thoughts On Anti-Bullying Week