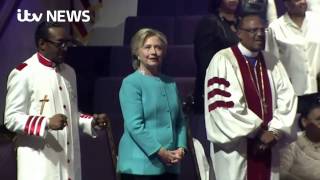 The US Presidential Election is less than a day away, with millions gearing up for an enormously significant night in American Politics. Hilary Clinton has been backed by several key celebrities at her campaigns. Whilst Donald Trump has stood alone, backed only by his supporters at his rallies. The two hopefuls have been battling for votes for months and it has all come down to this.

The latest polls suggest that Hilary is slightly in front of Trump (07/11/2016). And nearly 41 million Americans have already cast their votes, taking advantage of the early voting system employed by America. Trump has called Clinton a “corrupt person” in response to her being cleared of any criminal activity following the FBI investigation into her email accounts. Yet the dropped investigation has benefitted Clinton as she continues to press ahead in the polls. The two candidates continue to travel around the country in a final bid to gain support.

It’s been a dramatic couple of months leading up to this crucial week, and as the drama continues, you can find the latest at;

On results night, you can stay up to watch the night as it unfolds on the BBC, ITV and many more channels!

Plus wake up to the news live on Good Morning Britain with Susanna Reid and Piers Morgan who will be live in New York with a special edition of the programme which airs from 6am on ITV Wednesday the 9th November 2016.