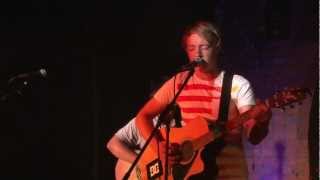 Fresh new acoustic/electric band The Broadcasts are a fairly recent addition to the South Wales music scene but have already proven that they are a force to be reckoned with. The band, who are aged between 17 and 18, was formed in early 2012 and consists of James Davies (lead vocals and guitar), Ashley Evans, (drums, percussion and backing vocals), Jack Langmead (rhythm guitar) and Jack Isaac (bass).

The Broadcasts were an instant hit in their hometown of Llantrisant, frequenting local pubs and clubs with their catchy, original music and quickly building themselves a dedicated fan base. The band has since gone on to win WICID Battle of the Bands 2012, a prestigious competition for young musicians in Rhondda Cynon Taff who are looking to make a name for themselves in the music industry. This has proved to be no problem for the Broadcasts who, at the end of 2012, were signed to independent London record label Right Recordings. The band have recently travelled to Prism Studios in Stoke to record their singles ‘Silvertown’ and ‘Obstacles’ with esteemed producer Stuart Epps who has worked with the likes of Elton John, Oasis and Robbie Williams. The double A-side will be available for download from iTunes very soon.

Despite all this success, the boys keep their feet firmly on the ground and continue to work diligently towards their career. So, if you like Ed Sheeran, Biffy Clyro and Ben Howard, keep a look out for The Broadcasts, you won’t be disappointed.