Home » News » Local Info » Wales vs Barbarians this Saturday at the Millenium Stadium! 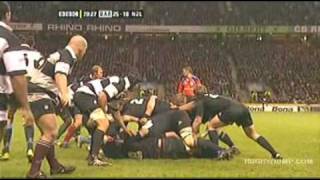 So, for those of you who’re into rugby, you probably know Wales are playing the Barbarians this Saturday (2nd June), right? It’s always great watching the Barbarians play: running from their own try-line, throwing crazy passes just to entertain the crowd, showing-off their most extravagant skills simply because they can are only a part of what you get to see. And nothing much rides on the way they play because they’re on the pitch just to have a good time and to make it an enjoyable match for all. It’s good watching the Baa-Baa’s play simply because you can feel the happiness and joy they get out of playing the game, rather than it being (for example) a World Cup final where the tension is unbearable and the game, ultimately, falls flat.

I’m lucky (or rich, whichever way you think about it) and have a ticket for the game on Saturday and I can’t wait. Let me just repeat that until you didn’t quite get it the first time. I. CAN’T. WAIT.

The Barbarians are some of the biggest names in rugby who come together to form a squad. In a way, they’re the Harlem Globetrotters of rugby — but they don’t bounce the ball, that’d be a knock-on — and it’s said that they hardly have any training together as a team and just go out and play. Awesome.

However, this game isn’t gonna be as light-hearted for the Welsh team. Three debutants are starting so they’re obviously going to want to make an impression; let’s just hope the giants who’re in the Baa-Baa’s squad don’t run over them like some crazed wildebeests. It’s also Shane Williams’ last-ever game of rugby, and he’s playing against Wales, so he’s bound to have an awesome send-off!

This is the Welsh team. The debutants are in bold:

We probably won’t know the Barbarians team until tomorrow but it’s sure to be an awesome game.

What do you think? Think we can beat the star-studded Barbarians?