Home » News » Your World » Why the New Apple iPad is great but not so good. 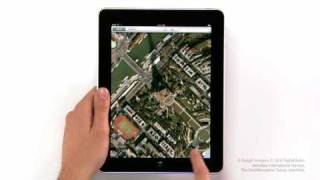 The new Apple iPad has been released in the USA and is set to hit Apple stores in the UK some time in April. This shiny new device features a bright 9.7inch screen but only weighs 1.5 pounds and the Ipad itself is on half an inch thick! This gismo comes with everything that the super popular iTouch does like Safari (Apples web browser), email, the ability to view your photos and videos, youtube, Ipod with iTunes, maps and access to the hundreds of Apps on the Apple App store. But on top of all these neat functions you have some cool new features too, like the iBook, which lets you read and buy books on the iPad. iBook even has its own built-in iBookstore. iWork has had an iPad overhaul and includes all the useful business tools such as Keynote, Pages, and Numbers. The iPads high-resolution LED-back lit screen means that anything from web browsing, watching movies to reading books should be comfortable and easy which you can do for up to 10 hours with its long life battery taken from Apples MacBook range.

There are a few things that could hold the iPad back from being the next big thing. iPad can not display Java or Flash which are the programs that run most of the webs video content (except youtube of course) this also means you wont be able to play all the silly web games like Club Penguin or RuneScape. The touch screen QWERTY keyboard is like the iTouch but due to the size of the iPad it could be difficult to type with one and while you hold it with the other. Apple do sell a stand and keyboard to go with it to make it more like a desktop PC but at that point it might just be better to have laptop? And when the iPad pricing is likely to start at £450, which around the same price as a top end Sony Notebook which is designed to do basic programs like word and web browsing, the iPad seams a little over priced.

The thing that the iPad does bring is the step between the smart phones and the laptop which is looks to do very well indeed but the real question is will people be ready to spend nearly £500 pounds on what could be said to be a big iTouch? Only time will tell.