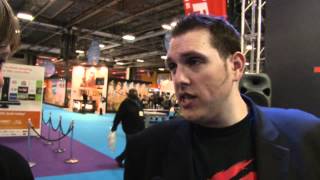 It’s the biggest consumer technology event in the UK, and I can safely say that it was also my childhood dream (sorry, I’m a gadget freak)!

If you can name a technology company, it is a cert that they were there, exhibiting their latest tech for us to buy.

It ranges from the latest 3DTVs, to a brand new tablet, even to a new car!

GoPro specialise in cameras that you can mount to your helmet, whilst doing a kickflip on your skateboard or speeding down a mountain on your bike. Click here to my interview with Go Pro

I knew I had to go to the Sony stand, as they have lots of up-and-coming gadgetry. However, being the biggest racing fan in the world, I might have got distracted by a state-of-the-art racing simulator on the way. I couldn’t resist it and I found myself driving a Ford Mustang and a Lotus F1 car from 1978. If you want to see what it was like, check out the video at: TL1 MOTION SIMULATION I think I did quite well, and was amazed at how astonishing it was!

Anyhow, we finally got to the Sony stand, and didn’t know what to do next. They had brand new tablets, a new smartphone, watch and even their latest 3D technology. We spent a good half hour looking around and testing the new gadgetry. I was left almost in awe at the feats that the technology has now reached! Check them out now at: SONY

There were just too much there for me to explain here, but we were involved in a Q&A session with 50 Cent, who was launching his new line of headphones. We also found a team who were attempting to build an iOS game from scratch, in the five days that they were at the Gadget Show Live. I rode on a [gyro thing?], which is used to give astronauts the feeling of weightlessness before they go into space. Needless to say I felt somewhat disorientated as I came off it. We also had a look at the latest electric bicycle technology. Seeing as I’m not too keen on bikes myself, our very own editor, Craig, had to test that out: Electric Bike

All in all, I had a wonderful day, and I was in gadget heaven! I would recommend anybody who is interested in music, photography, gaming, computers or just tech in general to book tickets in 2013. Trust me, you will love every second of it!

Here are more video reports from The Gadget Show 2012 Live: