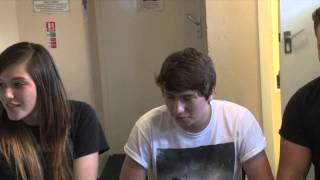 I started my work experience with Wicid on the 15th of July until the 19th, a whole week. As the days got closer to the 15th I got more and more excited every day as I didn’t know what the other part of Wicid is like in the offices.

I chose Wicid for my work experience because I love being with the Wicid gang, they make me laugh and they make a working day more fun. Even though you’re in an office all day doing work you will have the odd occasion of Wicid Rhys making everyone laugh with funny comments and faces and then you have the other Wicid crew being serious one minute and laughing their heads off the next.

For the 5 days I was there I did a lot of paperwork and photocopying, most of the photocopying was for Martyn. On the Wednesday I went with Adam and Mark to film at Nantgwyn in Cwmdare so we could advertise the home for disabled children, after that we all went to Aberdare Park to take some snaps on the cameras – that day was boiling! So, the reason we were in the park was because we were waiting for Rhys so he could take us to do an interview with the band Falling With Style. On the Thursday, Ponty’s Fringe Festival was on so at 12ish Mark and I left the office – after doing some editing – to go to Ponty. We caught the train and then made our way to Clwb y Bont to meet up with his brother as he was photographing as well. That day I felt really ill so I ended up going home after the first band had played, I was not happy with myself as I felt that I let everybody down. And on the Friday I photographed in the YMCA in Ponty for the Fringe Festival. Mark was in the Muni and his brother was in Clwb y Bont. After the bands had finished we went home, it was really nice to sit down after a long day/night of taking photos.

On the Saturday was Ponty’s Big Weekend, that was very exciting as we could push through the queue passing everyone and smiling, as we had press passes to photograph the event.

On the Monday and Tuesday I just did office work with Linsey and learnt how to edit photos on the office Mac with Mark.

The work experience benefitted me though knowing how much work goes through a youth team, it also benefitted me as I learnt how much work there actually is and how hard it all is.
.
I enjoyed the overall experience, there were laughs and the gossip and commenting on the food in the canteen (which I think is gross by the way).

Describing the office – when I walked up to the doors I couldn’t get in (great start) so I phoned Rhys so he could let me in, and by the way you need a card to get in and also through the next set of doors, and then you’re in the office area but not the actual Wicid office. The offices are really dark cold colours which is not what you expect ‘The Wicid Office’ to be, it should be awesome colours etc. But, anyway, you walk down the corridor which takes only, like, 10 steps and then you’re in the Wicid part of the office. Halfway down the corridor there’s a canteen but I didn’t eat in there as I took packed lunch as the food is expensive.

The offices are huge but after you’re here for a day or two you know the place like the back of your hand. I find it really cool that Wicid has their own fridge in the kitchen area which is at the bottom half of the office. And that is the Wicid office for you, I’m not going to tell you all of the office as it will take about 10 pages to write, that’s how big the office is.

I would definitely recommend this work experience to anyone who is interested in media and creative writing.

1 thought on “Work Experience With Wicid”