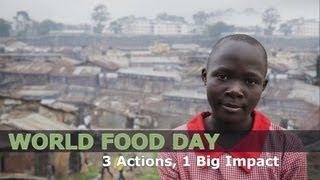 The day is about recognising the worldwide problem of hunger. And this year the theme for the day is “Agricultural cooperatives – key to feeding the world”. The theme has been chosen to highlight the role of co-operatives (no, not the shop, it’s where people come together voluntarily to help others) in their contribution to food security and ridding the world of hunger.

This year’s theme is also important as 2012 has also been designated “International Year of Cooperatives” by the UN General Assembly.

However, it is not just about donating food to people who are hungry and undernourished. It is also about doing something to help them help themselves.For example, giving a person a tractor to plough land rather than just giving them a sack of potatoes. They can help themselves in the future and would feel much more self-sufficient. That is what the day is trying to encourage.

World Food Day is a good day to try out all different kinds of food from all over the world.

I have tried several different foods such as French snails, duck, and Cochinillo Asado (roast suckling pig) – this dish is mostly served out in Spain.