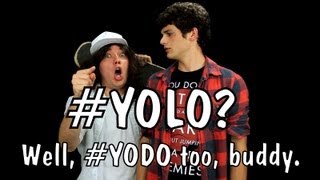 YOLO. The acronym that is filling people’s timelines on Twitter and Facebook, having regular mentions in magazines and even having memes dedicated to the saying. YOLO, for those of you who don’t know, stands for ‘You Only Live Once’. A statement that is very true. Very true, indeed. But are people taking this whole YOLO business too far? (and yes, you will see those four letters being repeated time and time again throughout this article.)

The abbreviation has been bouncing about on social networking sites — mainly Twitter — for a while now, but has seemed to become so much more popular after celebrities have been jumping on the bandwagon. After American rapper, Drake, added it into his song (“and you only live once that’s the motto, *explicit* YOLO“) and the teen heartthrob, Zac Efron, having the motto tattooed on his hand, it’s clearly given the acronym so much more popularity and thus getting almost everyone on board with the saying.

Now, if you ask me, I agree completely that it’s ideal to live your life to the full. When I say that, I mean that you should do the job YOU want to do, have fun, face your fears once in a while, that kind of thing. There’s bound to be people who agree here, right? Well, I know for a fact that there’s a lot of people who take YOLO too far.

Teenagers have actually used this excuse to drink, smoke and take drugs and arguing against their parents that you only live once and believe it’s a perfect excuse. Really? No, it isn’t. It’s a stupid excuse. Yeah, YOLO, so don’t go shorten that one chance of living. Life isn’t for THAT long, I hate to say it, but we’ll be dead for longer than we are alive (that’s depressing) so why give your body all the risks of shortening your life? If you YOLO then surely you want to live it long?

Another thing. Hurting people. Such as either something like cheating on someone or actually abusing them, be it sexually, physically or verbally. It’s wrong. You may YOLO, but so does everyone else, so don’t ruin it for them. Imagine you being hurt. Hurt because of some imbecile’s actions because they thought they had the right to do that because after all, we only live once. That’s a ridiculous excuse. That’s an excuse to bully and there’s no excuse for bullying so don’t even think about making one. YOLO, so do good and feel good doing it. Don’t hurt people.

Adults (immature usually) have even jumped on the bandwagon. I’m not too sure as to how many do, but some who think they are clever but are actually just immature kids trapped inside an adult’s body use the term to do idiotic things such as not paying their bills, ignoring their boss and duties, etc etc. Thankfully, I don’t actually know any adults who live by the motto, but I have read online and have been told via the word of mouth that there are some morons who do in fact use it as an excuse. Adults are supposed to have a decent level of maturity, yet there are some fools who go around screwing up things because of some silly Internet craze.

Here are some silly YOLO tweets. May or may not be true but if they have been done, I pity the people involved.

“Will YOLO pay my bills?”

“Having a p*ss up every weekend cause YOLO!”

“Dayumn, got the girlfriend pregnant. I’m out coz ya YOLO, ite?”

“Taking your drivers test, passing, then getting a fine. #YOLO!”

Sure, there’s good sides to people using YOLO and using it the right way, but so many people aren’t and do take it too far. You Only Live Once is a great motto, if you use it right. People ruin it by using it as a pathetic excuse.

Trust me, there’s so much more I could touch upon but I won’t because there’s too much and since I only live once, I want to do something else now. But, to finish off, “YOLO”  isn’t about random stupid shenanigans you will regret in the morning. “YOLO” is about opportunities that will make the most of your life. “YOLO” is about taking risks, but making sure they’re worthwhile ones. “YOLO” is doing everything you can to improve yourself as a person.

So next time you yell “YOLO!” before making a stupid move, think of what it really means to only live once.